Victoria Redel, "Before Everything" and Sheila Kohler, "Once We Were Sisters" 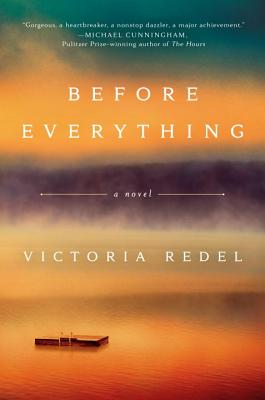 A luminous and richly layered novel evoking The Big Chill—the story of a group of lifetime friends who gather together to confront life, love, and now mortality.

Before Everything is a celebration of friendship and love between a group of women who have known each another since they were girls. They’ve faced everything together, from youthful sprees and scrapes to mid-life turning points. Now, as Anna, the group’s trailblazer, and brightest spark, enters hospice, they gather to do what they’ve always done—talk and laugh and help each other make choices and plans, this time in Anna’s rural Massachusetts home. Helen, Anna’s best friend, and a celebrated painter is about to remarry. The others face their own challenges—Caroline with her sister’s mental health crisis; Molly with a teenage daughter’s rebellion; Ming with her law practice—dilemmas with kids and work and love. Before Everything is as funny as it is bittersweet, as the friends revel in the hilarious mistakes they’ve seen each another through, the secrets kept, and adventures shared. But now all sense of time has shifted, and the pattern of their lives together takes on new meaning. The novel offers a brilliant, emotionally charged portrait, deftly conveying the sweep of time over everyday lives, and showing how even in difficult endings, gifts can unfold. Above all, it is an ode to friendship, and to how one person shapes the journeys of those around her.

Victoria Redel is the critically acclaimed author of four previous works of fiction and three collections of poetry. Her debut novel, Loverboy, was named one of the best books of the year by the Los Angeles Times and won the Sister Mariella Gable Prize from Graywolf Press and the Forward Silver Literary Fiction Prize. She has received fellowships from the Guggenheim Foundation and the National Endowment for the Arts and has contributed to the New York Times, the Los Angeles Times, Elle, O, the Oprah Magazine, Granta, One Story, and the Harvard Review. She received her MFA in poetry from Columbia University and teaches at Sarah Lawrence College.

ONE OF PEOPLE MAGAZINE’S BEST NEW BOOKS
“A searing and intimate memoir about love turned deadly.” —The BBC
“An intimate illumination of sisterhood and loss.” —People

When Sheila Kohler was thirty-seven, she received the heart-stopping news that her sister Maxine, only two years older, was killed when her husband drove them off a deserted road in Johannesburg.  Stunned by the news, she immediately flew back to the country where she was born, determined to find answers and forced to reckon with his history of violence and the lingering effects of their most unusual childhood—one marked by death and the misguided love of their mother.

In her signature spare and incisive prose, Sheila Kohler recounts the lives she and her sister led. Flashing back to their storybook childhood at the family estate, Crossways, Kohler tells of the death of her father when she and Maxine were girls, which led to the family abandoning their house and the girls being raised by their mother, at turns distant and suffocating.

We follow them to the cloistered Anglican boarding school where they first learn of separation and later their studies in Rome and Paris where they plan grand lives for themselves—lives that are interrupted when both marry young and discover they have made poor choices.  Kohler evokes the bond between sisters and shows how that bond changes but never breaks, even after death.

“A beautiful and disturbing memoir of a beloved sister who died at the age of thirty-nine in circumstances that strongly suggest murder. . . . Highly recommended.” —Joyce Carol Oates

Sheila Kohler was born in Johannesburg, South Africa. She is the author of fourteen works of fiction including the novels Dreaming for Freud, Becoming Jane Eyre, and Cracks, which was nominated for the IMPAC Dublin Literary Award and made into a film starring Eva Green. Her work has been featured in the New York Times and O Magazine and included in The Best American Short Stories. She has twice won an O'Henry Prize, as well as an Open Fiction Award, a Willa Cather Prize, and a Smart Family Foundation Prize. She teaches at Princeton University and lives in New York City.

If you're unable to attend the event and would like a signed copy of Before Everything and/or Once We Were Sisters, please purchase the "Signed" version below.

Once We Were Sisters: A Memoir (Paperback)