Steven Gaines, "One of These Things First" 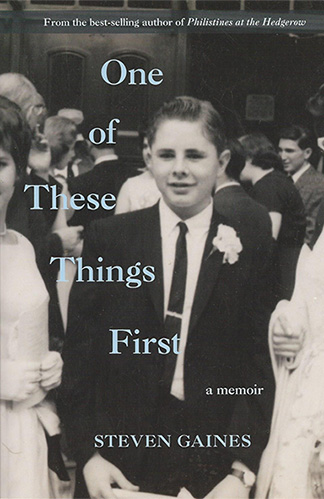 One of These Things First is a wry and poignant reminiscence of a 15 year old gay Jewish boy in Brooklyn in the early sixties, and his unexpected trajectory from a life behind a rack of dresses in his grandmother’s bra and girdle store, to Manhattan’s fabled Payne Whitney Psychiatric Clinic, a fashionable Charenton for wealthy neurotics and Ivy League alcoholics, whose famous alumni include writers, poets, madmen, Marilyn Monroe, and bestselling author Steven Gaines.

With a gimlet eye and a true gift for storytelling, Gaines captures his childhood shtetl in Brooklyn like an Edward Hopper tableau, with all its dramas and secrets: his philandering grandfather with his fleet of Cadillacs and Corvettes; a trio of harpy saleswomen; a giant, empty movie theater, his portal to the outside world; a shirtless teenage boy pushing a lawnmower in front of a house on Long Island; and a pair of tormenting bullies who own the corner candy store whose taunts drive him to a suicide attempt.

Steven Gaines also takes the reader behind the walls of Payne Whitney, the “Harvard of psychiatric clinics,” as Time magazine called it, populated by a captivating group of neurasthenics who subtly begin to change him in unexpected ways. The cast of characters includes a famous Broadway producer who becomes his unlikely mentor, an elegant woman who claimed to be the ex-mistress of newly elected president John F. Kennedy, a snooty, suicidal Harvard architect, and a seductive young Contessa. At the center of the story is a brilliant young psychiatrist who promises to cure a young boy of his homosexuality and give him the normalcy he so longs for. Through it all, Gaines weaves a tale that delights and disturbs with his trademark raconteur panache.

Steven Gaines is the author of Philistines at the Hedgerow: Passion and Property in the Hamptons; The Sky's the Limit: Passion and Property in Manhattan; Simply Halston, the biography of the fashion designer; and co-author of The Love You Make: An Insider's Story of the Beatles, among other books. He's a co-founder of the Hamptons International Film Festival and lives in a small hamlet on the East End of Long Island.

If you're unable to attend the event and would like a signed copy of One of These Things First, please purchase the "Signed" version below.

One of These Things First (Hardcover)