Sandy McIntosh, "Lesser Lights: More Tales From a Hamptons' Apprenticeship" and Mary Mackey, "The Jaguars That Prowl Our Dreams: New and Selected Poems 1974 to 2018"

This second collection of memoirs continues McIntosh's coming of age story set in Long Island's famous Hamptons arts colony. Included are stories of wild adventures in filmmaking with Norman Mailer and Ilya Bolotowsky, the discovery of Communists among the writers and painters, as well as encounters with Truman Capote, Jean Stafford, P. G. Wodehouse, and others.

"I love time travel stories - and this book offers a trip back to a time and place that seems almost like science-fiction today. Wonderful characters, great surprises, and a sly sense of humor that kept me eagerly turning the pages." - R.L. Stine

Sandy McIntosh is author of 11 poetry collections, 4 prose titles and 3 computer software programs, including the perennial best-selling Mavis Beacon Teaches Typing! He has published opinion pieces in The New York Times, The New York Post, The Daily Beast, and elsewhere. He is featured in 14 television documentaries, including PBS FRONTLINE about Donald Trump, with whom he attended military school. He won the Silver Medal in the Film Festival of the Americas for screenwriting. His latest book is Lesser Lights (Marsh Hawk Press, 2019).

Mary Mackey, The Jaguars That Prowl Our Dreams: New and Selected Poems 1974 to 2018 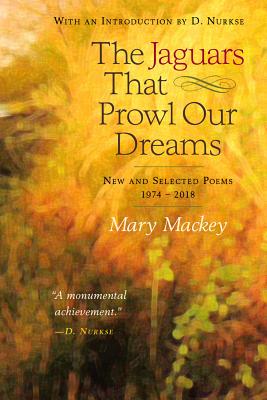 In The Jaguars That Prowl Our Dreams: New and Selected Poems 1974 to 2018, Mary Mackey writes of life, death, love, and passion with intensity and grace. Her poems are hugely imaginative and multi-layered. Part One contains forty-eight new poems including twenty-one set in Western Kentucky from 1742 to 1975; and twenty-six unified by an exploration of the tropical jungle outside and within us, plus a surreal and sometimes hallucinatory appreciation of the visionary power of fever. Part Two offers the reader seventy-eight poems drawn from Mackey's seven previous collections including Sugar Zone, winner of the 2012 Oakland PEN Josephine Miles Award for Literary Excellence.

"Mary Mackey's poems are powerful, beautiful, and have extraordinary range. This is the poetry of a woman who has lived richly, and felt deeply. May her concern for the planet help save it." - Maxine Hong Kingston

"Always Mackey's eye is drawn to the marginalized, the poor, the outcast, the trivialized. [In] THE JAGUARS THAT PROWL OUR DREAMS, she has created an oeuvre, wilder, more open to change with each passing year. Hers is a monumental achievement." - D. Nurkse

Mary Mackey received a BA from Harvard and a PhD in Comparative Literature from The University of Michigan. Her published works include eight collections of poetry, four from Marsh Hawk Press—The Jaguars That Prowl Our Dreams: New and Selected Poems 1974 to 2018 (2018), Travelers with No Ticket Home (2014), Sugar Zone (2011), and Breaking the Fever (2006)—and fourteen novels, one of which made The New York Times Bestseller list. She is the winner of the 2012 Oakland PEN Josephine Miles Award for Literary Excellence. Featured four times on The Writer's Almanac, her poems have been praised by Maxine Hong Kingston, Wendell Berry, Jane Hirsfield, D. Nurkse, Ron Hansen, Dennis Schmitz, and Marge Piercy for their beauty, precision, originality, and extraordinary range.

Mackey's works have been translated into twelve foreign languages including Japanese, Hebrew, Greek, Russian, and Finnish. A co-founder of the Feminist Writers Guild with Adrienne Rich and Susan Griffin, and co- founder of the California State University Sacramento Creative Writing Program, she is past president of the West Coast branch of PEN, a Fellow of the Virginia Center for the Creative Arts, a member of the National Book Critics Circle, and Professor Emeritus of English at CSUS. For over twenty-five years, she has been traveling to Brazil with her husband, Angus Wright, who writes about land reform and environmental issues. Her literary papers are archived in the Sophia Smith Special Collections Library, Northampton, MA. Her collection of rare editions of small press poetry books authored by Northern California poets is archived in the Smith College Mortimer Rare Book Collection.

If you're unable to attend the event and would like a signed copy of Lesser Lights and/or The Jaguars that Prowl Our Dreams, please purchase the "Signed" version below.

The Jaguars That Prowl Our Dreams: New and Selected Poems 1974 to 2018 (Paperback)

Signed "The Jaguars That Prowl Our Dreams" (Not Attending)