A COMMUNITY OF AUTHORS AND READERS. 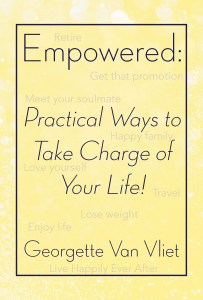 Empowered: Practical Ways to Take Charge of Your Life! is an inspirational guide to help you overcome life's challenges, so you feel like a lucky, worthy person who knows how to attract success. It is filled with simple practices that will enhance your life. There is a chapter devoted to all the difficult topics in our lives that tend to stress us out: dating, marriage, divorce, breaking up, raising children, money, career, and losing weight. The most common response I get from people who read the book is, “This is easy!  I can do this!” And that was my goal: to help people believe that so much of what we want out of life is within our reach.

Georgette Van Vliet is a motivational speaker, life coach, and the author of Empowered: Practical Ways to Take Charge of Your Life! The book offers practical tools to help people release negativity, depression and anxiety. It focuses on ways to cope with: dating, divorce, marriage, self-care, finances, weight loss, raising children, crabby coworkers, and family members! Georgette believes that everyone is entitled to live a life of love, joy, and abundance. Follow her on Facebook and Instagram @georgettevanvliet. 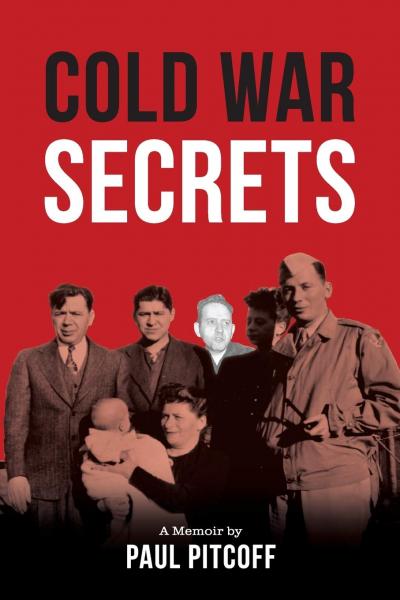 Cold War Secrets chronicles growing up in the political and creative hot bed of Greenwich Village in the 40s and 50s. The seriousness and impact of the McCarthy era is fused with humor as Pitcoff encounters the various ironies of the human condition.

The author’s memoir is a search to discover his parents’ well-hidden secrets and learn how they shaped his identity and life perspective. One of Paul’s earliest evidences of secrets is the appearance of FBI agents to interview his father. His mother offers reassurance: “They just happened to be in the neighborhood and dropped by.” Only late in life, while researching his parents for this memoir does the author uncover the purpose of those visits along with other family secrets and consider the effects on his life. Was his father burdened with shame for possibly being a Soviet asset?

Paul connects the journey to discover and make sense of the secrets, to the various rites of passage growing up in Greenwich Village, brimming with artists communists, gangs, and romance.

“A writer remembers a Cold War—era childhood disoriented by the impenetrable mystery of his parents’ political lives . . . Pitcoff . . .was only 11 years old when a pair of FBI agents visited his [New York City] home in 1954, asking to speak to his father, Robert…Pitcoff was finally and dramatically able to discover that his father led a cinematically eventful life . . . This memoir, at its best, is reminiscent of the literary work of French author Patrick Modiano…A memoir overflowing with drama that evocatively re-creates the atmosphere of peril and uncertainty during the Cold War.”
—Kirkus Reviews

Paul Pitcoff is Emeritus Professor at Adelphi University. He had multiple careers in education, film, law, and youth development. He has a Master’s in Fine Arts from New York University, and a law degree from Cardozo Law School. Paul founded and directed the development of the Film Program and the Department of Communications at Adelphi University, in which he served as chair for over fifteen years. Concurrently, Paul produced and directed numerous award-winning documentary films. In 2006, Rutgers University Press, published Paul’s book, Beyond the Foster Care System, about preparing teens in foster care for independent living. Cold War Secrets, was inspired by recently released FBI transcripts related to the secret life of Paul’s father. Paul is currently at work on Tenure, a novel about mid-life change set at a university. 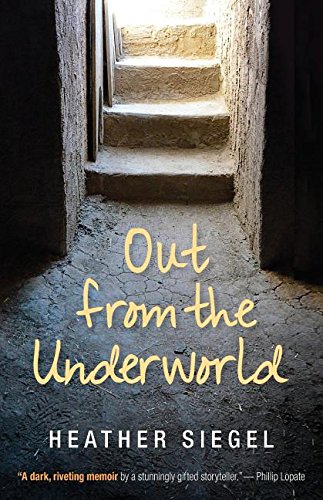 Heather Siegel was six years old when her mother disappeared, sending her father into a tailspin that took Heather and her siblings down with him―from a comfortable suburban home to a barely habitable basement apartment, a dark world they soon found themselves fighting to return to from the exile of foster care, then fighting even harder to escape. Forty years later, Heather Siegel tells the remarkable story of how she and her siblings, Jaz and Greg, banded together to find out what happened to their mother and fight their way "Out from the Underworld" with nothing but their wits, determination, unbreakable bonds, and gifts for humor and compassion to sustain them. A wrenching, inspiring story filled with heartbreak, hope and love, Out from the Underworld will move you to laughter and tears.

"Heather Siegel has taken the raw material of an unusually deranged childhood, and done with it what very few can do: fashioned a piece of writing so smart, funny, and insightful that, as we read, we see the narrator growing from a street-smart little cynic into a remarkably understanding woman. More one cannot ask of any memoirist."  -Vivian Gornick

Heather Siegel is the author of the award-winning, coming-of-age memoir, Out From the Underworld, a finalist in Foreword Review's 2016 INDIES Book of Year Award. Her newest work, The King & The Quirky: A Memoir of Love, Marriage, Domesticity, Feminism, and Self, is due out April 2020, and was named a semifinalist the Kore Press 2018 Memoir Award. Her creative nonfiction has appeared on Salon.com, in The Flexible Persona, and Entrophy Magazine. She holds an MFA from The New School University, and lives on Long Island where she teaches academic and creative writing for local colleges and continuing education programs. She enjoys mentoring writers through her private workshop/book incubator, Creative Writing Long Island. More about her can be found at www.heathersiegel.net.