a community of authors and readers.

In the early 1970s, two young filmmaking brothers unloaded their camera and recording equipment on the collapsing front porch of a dilapidated manor in East Hampton. The seemingly abandoned, decaying shell of a once-glorious home belonged to Edith Bouvier Beale. She and her daughter Edie Beale were the aunt and first cousin of former First Lady, Jacqueline Kennedy Onassis.

Lois Erdmann Wright was one of only a handful of outsiders allowed into Grey Gardens. During the decades before the documentary, Lois and her mother had formed a close, family-like bond with the Bouvier-Beale women, and Lois learned to overlook the destruction and disarray of the home.For many years, the Beales lived alone in the crumbling estate, physically and financially unable to keep the house up to the codes demanded by the local Board of Health.Lois understood the Beale family. The two Edies were outsiders, trying to eke out a reclusive existence among their haughty, East Hampton neighbors. Surrounded by dozens of cats, raccoons, and piles of trash, Lois found acceptance, security, and unconditional love in the company of Grey Gardens’ unlikely inhabitants.She never questioned her dear friends’ lives, and they never questioned Lois. Much like the Beale ladies, and the mysterious mansion disintegrating around them, Lois held onto her own secrets, including one impossible rumor that connected her to the Bouvier-Beales in a way she never expected, and would never forget.Nearly a half-century later, the worldwide appeal and fascination with Grey Gardens hasn't dampened.

The story has been recreated as a Tony Award winning Broadway musical, as well as a feature length film, and a second documentary.Now, Lois Wright, the “Ghost of Grey Gardens,” tells the truth embedded in the cult-classic fable. For the first time ever, Lois recounts her ninety years of life, including the perfectly-imperfect years she spend with the Beales. Featuring never before seen personal photos, documents, and letters, and revealing jaw-dropping facts, this book is a must read for any Grey Gardens fan.

Tania Hagan was born in Illinois, but moved to Southern California as a young teen. She graduated from the University of California, Irvine with a degree in Social Science and Psychology. She began her writing career shortly after school, when she wrote for a major business magazine. She also read the nightly business report for the company's TV news. At the same time, she produced, and reported for a weekly TV news magazine program. After she was married, Tania and her husband moved back to the Chicago area, where she worked briefly as a stringer for a local newspaper. She also became a successful Realtor, and continued to write for online, as well as for print publications. They have one beautiful daughter. Her dream of dreams is to eventually adopt many more children. Out of everything she's ever accomplished, she is most proud of being a mom. The Ghost of Grey Gardens: Lois Wright's Life Story is Tania's first full-length nonfiction, coauthored with Lois Erdmann Wright, of Grey Gardens and LTV fame. The Cure was Tania's debut novel. Since that release, Tania wrote the sequel to The Cure - The Angel Factor in addition to The Haunting of Tinley Hall and Severed. She also collaborated on Lurking in the Shadows and Demons, Devils, and Denizens of Hell. She's been nominated for and won several awards as an author, including her 2018 nomination and finalist status in the Author Academy Awards.

The Ghosts of Eden Park by Karen Abbott 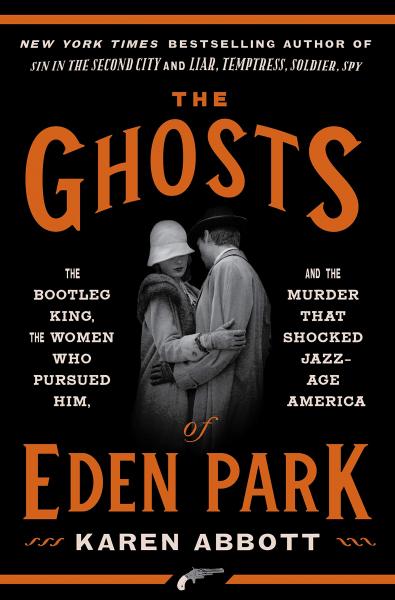 In the early days of Prohibition, long before Al Capone became a household name, a German immigrant named George Remus quits practicing law and starts trafficking whiskey. Within two years he's a multi-millionaire. The press calls him "King of the Bootleggers," writing breathless stories about the Gatsby-esque events he and his glamorous second wife, Imogene, host at their Cincinnati mansion, with party favors ranging from diamond jewelry for the men to brand-new cars for the women. By the summer of 1921, Remus owns 35 percent of all the liquor in the United States.

Pioneering prosecutor Mabel Walker Willebrandt is determined to bring him down. Willebrandt's bosses at the Justice Department hired her right out of law school, assuming she'd pose no real threat to the cozy relationship they maintain with Remus. Eager to prove them wrong, she dispatches her best investigator, Franklin Dodge, to look into his empire. It's a decision with deadly consequences. With the fledgling FBI on the case, Remus is quickly imprisoned for violating the Volstead Act. Her husband behind bars, Imogene begins an affair with Dodge. Together, they plot to ruin Remus, sparking a bitter feud that soon reaches the highest levels of government--and that can only end in murder.

Combining deep historical research with novelistic flair, The Ghosts of Eden Park is the unforgettable, stranger-than-fiction story of a rags-to-riches entrepreneur and a long-forgotten heroine, of the excesses and absurdities of the Jazz Age, and of the infinite human capacity to deceive.

KAREN ABBOTT is the New York Times bestselling author of Sin in the Second City, American Rose, and, most recently, Liar, Temptress, Soldier, Spy, named one of the best books of the year by Library Journal and the Christian Science Monitor. A native of Philadelphia, she now lives in New York City.

Bookmarked: Reading My Way From Hollywood to Brooklyn by Wendy W. Fairey

Wendy Fairey grew up among books. As the shy and studious daughter of famed Hollywood columnist Sheilah Graham—F. Scott Fitzgerald’s lover during the last years of his life—she began as a child reading her way through the library Fitzgerald had assembled for her mother and escaped into the landscape of classic English novels. Their protagonists became her intimates, starting with David Copperfield, whose sensibility and aspirations seemed so akin to her own. She felt as plain as Jane Eyre but craved the panache of Becky Sharp. English novels squired her to adulthood, and Bookmarked is a memoir of that journey.

In a series of brilliant chapters that blend the genres of personal memoir and literary criticism, we follow Fairey, refracted through her reading, as student, wife, professor, mother, grandmother, and happily remarried writer. E. M. Forster’s Howards End helps her cope with a failing marriage; Virginia Woolf’s Mrs. Ramsay teaches important lessons about love and memory. Like Eliot’s Daniel Deronda, she learns only as an adult of her Jewish heritage (and learns also the identity of her real father, the British philosopher A. J. Ayer). In this intimate and inspiring book, Wendy Fairey shows that her love of reading has been both a source of deep personal pleasure and key to living a fulfilling and richly self-examined life.

Wendy W. Fairey holds a doctorate from Columbia University and teaches English literature and creative writing at Brooklyn College, where she was also formerly a dean. She is the author of One of the Family (Norton 1992), a family memoir, and Full House (SMU Press 2002), a collection of linked stories. Fairey is married to Mary Edith Mardis with whom she lives in Manhattan and East Hampton. She has two children and four grandchildren.

The Ghosts of Eden Park: The Bootleg King, the Women Who Pursued Him, and the Murder That Shocked Jazz-Age America (Hardcover)

Bookmarked: Reading My Way from Hollywood to Brooklyn (Paperback)