Oxford College Arms is an accessible 112-page handbook designed to open up the treasure chest of ancient coats of arms and relate them to today's University and college branding. 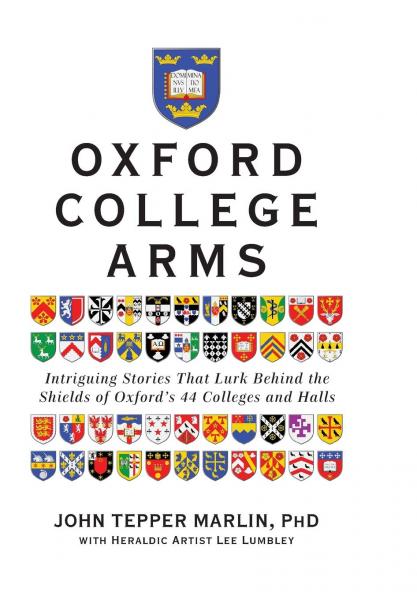 The book is written to help current Oxford students and applicants to Oxford college find their way among the 44 different colleges and Permanent Private Halls. It is also useful as a guide and reference for college and university staff, school advisers, parents and alumni. It will also be handy for tourists, Oxfordshire residents, and visitors to Oxford to help them understand the connections between the college arms and history, and the living institutions of today. It has interest and value for anyone interested in heraldry and British history. The large marketplace for branded goods in tourism and souvenir shops provides a platform for promoting the book as a guide to the merchandise. The book also serves as a guide for the purchase and collection of college memorabilia.

The colleges are the human face of Oxford. The halls came before the colleges and the colleges became more important to the life of the University than the central administration. Oxford as long ago as 1096 had students coming to study, usually novices heading for monasteries or the priesthood. Starting in 1167, when Henry II prohibited students going to Paris to study, Oxford began its relentless growth, stopping only during the reigns of Henry VIII, who dissolved the monastic colleges, and Charles I, who depleted the assets of all the colleges to pay for his defense against the Parliamentary army. The number of students spurted in the 20th century, especially after the Second World War when the British Government wisely invested in educating the armed-services war survivors and strengthened university programs to develop needed new professional specialties and skills.

Students and faculty must apply to a college or hall, and nowadays they almost always live in one. That means they need a quick link to identifying each college. The coats of arms and Oxford College Arms help differentiate among the colleges.

John Tepper Marlin M.A. (Trinity, Oxon.), Ph.D. first became interested in heraldry as a boy at Gilling Castle, Ampleforth College, where he ate in the Great Hall under stained glass windows featuring the arms of the Yorkshire family of Oliver Cromwell's General Fairfax.

Please register to attend this event by clicking here.

If you are unable to attend and would like to purchase a signed copy, please purchase the SIGNED COPY below.