Hilary Knight, "The 365 Days of Eloise: My Book of Holidays"

It’s Eloise’s sixtieth birthday—though she’s still not a day over six. Celebrate by joining Eloise on this wonderful journey through the year with all new paintings by acclaimed artist Hilary Knight! 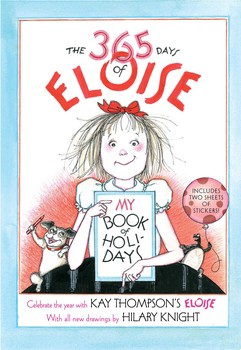 Eloise has been warming the hearts of readers for sixty years. Now, follow everyone’s favorite Plaza girl, Eloise, through the calendar as she fills each day of the year with even more new adventures, featuring all new original artwork by Hilary Knight!

Complete with two sets of sticker sheets so you can personalize your books, fun Eloise facts, and brand-new illustrations, fans old and new will find something to love in this treasured new addition to the Eloise collection.

Hilary Knight, son of artist-writers Clayton Knight and Katharine Sturges, was educated at the Art Students League, where he studied with Reginald Marsh. Besides the Eloise books, Hilary Knight has illustrated more than fifty books for children, six of which he wrote himself. He lives and works in New York City, not far from The Plaza Hotel.

In Conversation with Laura Donnelly

She contributes a weekly column for the East Hampton Star called "Seasons By The Sea" as well as restaurant reviews. She is a contributor to East magazine, as well as the Dallas Morning News, Texas Monthly, Hamptons, and Town and Country magazines. Along with working as Alec Baldwin's private chef for a while, she has developed dessert recipes for Sheila Lukins's cookbooks, and has contributed recipes to the Barefoot Contessa books and TV show, and was the pastry chef for the Laundry Restaurant, Della Femina, and The Living Room. Before she gives cookbooks as gifts, she dog-ears favorite recipes, much to the dismay of the recipients....

The 365 Days of Eloise: My Book of Holidays (Hardcover)