Gerald Marzorati, "Late to the Ball" 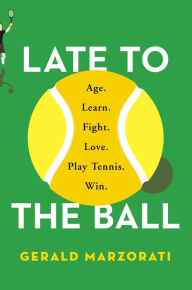 An award-winning author shares the inspiring and entertaining account of his pursuit to become a nationally competitive tennis player—at the age of sixty.

Gerry Mazorati started playing the game seriously in his mid-fifties. He had the strong desire to lead an examined physical life, to push his body into the “encore” of middle age. In Late to the Ball Mazorati writes vividly about the difficulties, frustrations, and the triumphs of his becoming a seriously good tennis player. He takes on his quest with complete vigor and absolute determination to see it through, providing a rich, vicarious experience involving the science of aging, his existential battle with time, and the beautiful, mysterious game of tennis. Late to the Ball  is also captivating evidence that the rest of the Baby Boomer generation, now between middle age and old age, can find their own quest and do the same.

Gerald Marzorati was the editor of The New York Times Magazine from 2003-2010. He previously worked as an editor at the Soho News, Harper’s magazine, and The New Yorker. His writing has appeared in The New York Times and many other publications. He is the author of Late to the Ball and A Painter of Darkness, which won the PEN/Martha Albrand award for a first book of nonfiction. He is the editorial director of Times Live.

If you're unable to attend the event and would like a signed copy of Late to the Ball, please purchase the "Signed" version below.