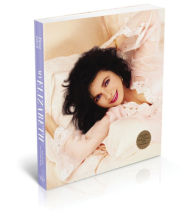 Part memoir and part homage, My Elizabeth offers rare insight into a woman adored by millions but truly known to only a few.

As a young man, then-unknown photographer Firooz Zahedi fell under Elizabeth Taylor's spell; they became lifelong friends, and the relationship changed his life. In My Elizabeth, the now-celebrated Zahedi shares with readers his unforgettable photographs of Elizabeth, presenting a loving tribute in words and images to this iconic Hollywood legend.

With a preface from columnist Liz Smith and a foreword from Vanity Fair contributor Bob Colacello.

Firooz Zahedi was born in Tehran, Iran, in 1949 and attended secondary school in England before moving to the United States in 1969 to study at Georgetown University's School of Foreign Service. After a short career as a diplomat in Washington, DC, he went on to attend the Corcoran School of Art and graduated with a degree in Visual Communication. He became a photographer for Andy Warhol's Interview magazine and moved to Los Angeles in 1978 with his friend, Elizabeth Taylor, as her personal photographer on a film set. In 1990 he signed a contract with Vanity Fair. His editorial work has appeared internationally on the covers of other magazines such as Vogue, GQ, Town&Country, Glamour, InStyle, Time, Architectural Digest, and Entertainment Weekly. His portraits, fine art photographs, and collages have been shown in prominent galleries in New York, Los Angeles, Basel, London, and Dubai as well as the Los Angeles County Museum of Art and the Norton Museum in West Palm Beach. Firooz and his wife divide their time between their homes in Los Angeles, New York, and Palm Beach.

If you're unable to attend the event and would like a signed copy of My Elizabeth, please purchase the "Signed" version below.