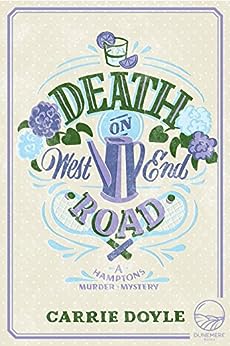 More murder in the Hamptons, from best-selling author Carrie Doyle!

Like a basket of warm cinnamon buns, an unsolved crime is something that Hamptons innkeeper and sleuth Antonia Bingham just can't resist. Despite a busy high-season schedule and an inn booked to capacity, Antonia has agreed to investigate a cold case in her beloved adopted hometown, East Hampton, NY: the killing of Susie Whitaker, whose brutal 1990 slaying on a tennis court in the poshest part of town was never solved. And the person who has hired Antonia? Prime suspect Pauline Framingham, a manipulative pharmaceutical heiress from a powerful family.

As Antonia attempts to unravel the mysteries of the past she unearths even darker secrets and ultimately wonders if it would have been best to let sleeping dogs lie. To make matters worse, past acquaintances and love interests reappear in the Hamptons, disrupting Antonia's world and causing her to scurry to the fridge for comfort. Death on West End Road is the third book in best-selling author Carrie Doyle's Hamptons Murder Mystery Series. Along with a colorful cast of supporting characters, the beating heart of the book is Antonia Bingham, restaurateur, gourmand, and nosy carb-lover.

Death on West End Road is an entertaining mystery that will keep audiences guessing right up until the end. Fast-paced...alive with secrets, intrigue and murder. - FOREWORD REVIEWS

Doyle (The Infidelity Pact, 2008, etc.) is a self-described "foodie" and an avid cheerleader for the quaint village of East Hampton, New York...An appealing, three-dimensional heroine and some clever plot twists make this an enjoyable, quick read. - KIRKUS REVIEWS

Carrie Doyle Karasyov lives with her husband and two sons in New York City and East Hampton, NY. A fan of mystery and crime novels, a cooking enthusiast, a former employee of The Barefoot Contessa store during her college days, and a generally nosy person, Carrie combined all of her interests to create Antonia Bingham, the foodie innkeeper and reluctant detective character who stars in the Hamptons Murder Mystery series. Carrie is the bestselling author of six novels (written as Carrie Karasyov), as well as a Contributing Editor to Hamptons magazine. She is currently developing an animated series she has co-written with her 14 and 12 year old sons. Visit Carrie's author site at www.carriekarasyov.com.

If you're unable to attend the event and would like a signed copy of Death on West End Road, please purchase the "Signed" version below.