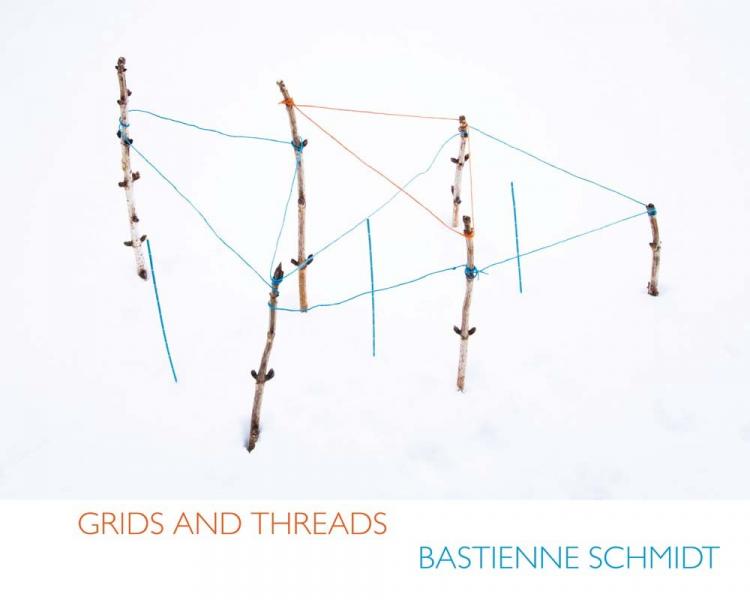 With her latest project Grids and Threads, the multiple award-winning artist Bastienne Schmidt provides a minimalist meditation on the concept of white space and it’s perception. It is inspired by Marcel Duchamp’s “Three Standard Stoppages,” in which three imaginary measuring devices underline the arbitrariness to qualify and quantify something. On one hand conceptual photography is used in a series of created installations, where the sense of scale becomes a riddle. Objects and colorful markers are photographed in the snow from a bird’s eye perspective, using the white environment as a blank canvas. The installations were built with recycled fabrics and colored threads. It is a continuation of Schmidt’s artistic search for concepts of space and systems that define them.

The second part of the project consists of mixed media works on Arches paper, where a punched grid of 8 x 8 inches is divided into one square inch spaces, which draw light and shadow onto the white paper. The idea of creating a series of a never-ending variation of white squares in a reductive process is related to the artistic search of Agnes Martin and Robert Ryman. The square grid in white is a quiet reflection on the concept of a minimal space; the variations, of what happens inside of the squares, play with the thought of absolute freedom and absolute constraint.

Bastienne Schmidt’s work is included in the collection of the Museum of Modern Art in New York, the International Center of Photography, the Brooklyn Museum, the Corcoran Gallery in Washington D.C., and the Victoria and Albert Museum in London, among others.