Andrew Solomon, "Far and Away" 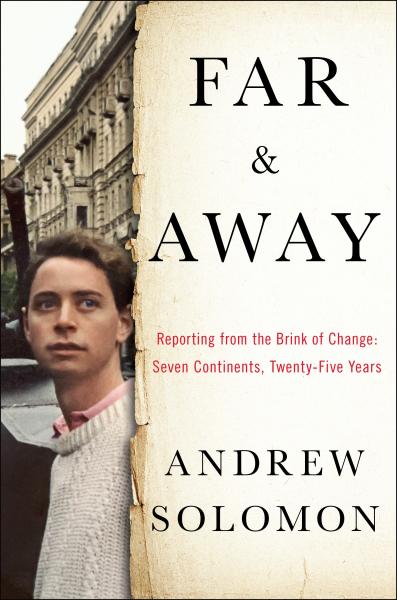 From the winner of the National Book Award and the National Books Critics’ Circle Award—and one of the most original thinkers of our time—a riveting collection of essays about places in dramatic transition.

Far and Away collects Andrew Solomon’s writings about places undergoing seismic shifts—political, cultural, and spiritual. Chronicling his stint on the barricades in Moscow in 1991, when he joined artists in resisting the coup whose failure ended the Soviet Union, his 2002 account of the rebirth of culture in Afghanistan following the fall of the Taliban, his insightful appraisal of a Myanmar seeped in contradictions as it slowly, fitfully pushes toward freedom, and many other stories of profound upheaval, this book provides a unique window onto the very idea of social change. With his signature brilliance and compassion, Solomon demonstrates both how history is altered by individuals, and how personal identities are altered when governments alter.

A journalist and essayist of remarkable perception and prescience, Solomon captures the essence of these cultures. Ranging across seven continents and twenty-five years, Far and Away takes a magnificent journey into the heart of extraordinarily diverse experiences, yet Solomon finds a common humanity wherever he travels. Illuminating the development of his own genius, his stories are always intimate and often both funny and deeply moving.

Andrew Solomon is a professor of psychology at Columbia University, president of PEN American Center, and a regular contributor to The New Yorker, NPR, and The New York Times Magazine. A lecturer and activist, he is the author of Far and Away: Reporting from the Brink of Change; the National Book Critics Circle Award-winner Far from the Tree: Parents, Children, and the Search for Identity, which has won thirty additional national awards; and The Noonday Demon: An Atlas of Depression, which won the 2001 National Book Award, was a finalist for the Pulitzer Prize, and has been published in twenty-four languages. He has also written a novel, A Stone Boat, which was a finalist for the Los Angeles Times First Fiction Award and The Irony Tower: Soviet Artists in a Time of Glasnost. His TED talks have been viewed over ten million times. He lives in New York and London and is a dual national. For more information, visit the author’s website at AndrewSolomon.com.

If you're unable to attend the event and would like a signed copy of Far and Away, please purchase the "Signed" version below.

Far and Away: Reporting from the Brink of Change (Hardcover)

The Noonday Demon: An Atlas of Depression (Paperback)