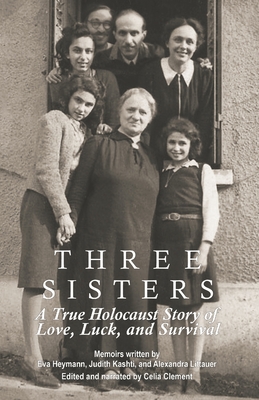 "Low flying planes began to direct their machine gun fire at the refugees. All four of us had crawled into a large culvert. We heard the bullets crackle again and again. Then the ground trembled under the hooves of shying horses breaking away from their fully laden carts. They raced above our heads sounding like wild drum beats. I was lying in the culvert, pulling snails from the walls, as unconcerned as if all this had nothing to do with me. It was an almost euphoric feeling."

Three young Jewish sisters from Leipzig, Germany huddle together in the cold darkness of night waiting for their smugglers to rescue them and bring them to freedom in Belgium. Their mother, in a state of shock following Kristallnacht, is left behind, sedated in a psychiatric hospital. November 1938 begins the four-year ordeal of the seven member Kroch family who endure unfathomable conditions in their fight for survival: imprisonment in French internment camps, hiding in a tiny tool shed, and adapting to the deplorable conditions of a Nazi prison. The memoirs of Alexandra, age 11, and her sisters, 15-year-old Eva and 14-year-old Judith, interweave as they recount the true story of their escape from the Nazis.

"Leaving behind their life of luxury, the girls describe unimaginable hunger, deprivation and fear. Family love, music, and the close friendship of strangers are the essential ingredients that sustain them through the hardships they face at every step. Two factors ultimately saved them: rescuers and enormous luck. A narrative backdrop threads through the story, providing the socio-political context. From a historical perspective and from the three sisters' witness accounts, the reader will come to understand the progression of antisemitism in Germany and France, the course by which Hitler dismantled democracy, the role France adopted as Nazi collaborators, and how the Swiss policies towards Jews were executed.

"This story of resiliency and courage will inspire and uplift. By reading Three Sisters, a testament to the human spirit, you will bear witness, and in so doing, keep the memories of the Holocaust alive.

"When you listen to a witness, you become a witness." ― Elie Wiesel

"The story is deeply moving and very disturbing. The material is compelling and reads beautifully." ― Andrew Solomon, award-winning author of "The Noonday Demon" and "Far from the Tree"