No Treason: The Constitution of No Authority (Paperback) 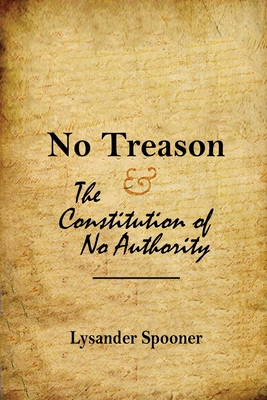 The author was an anti-authoritarian philosopher and legal theorist who had spent his earlier life vigorously campaigning against slavery. Following the American Civil War however, he became horrified at the brutality and carnage that had been unleashed. Redoubling his criticisms, Spooner asserts his dismay that the U.S. government was rendered inert by its Constitution - slavery was only abolished after a long and bloody war, whereas had it been forbade at the outset, no such conflict would have arisen.

A strong proponent of natural law - the concept that all humans had rights endowed at the point of their birth - Spooner had a sense of revulsion at how American politics had ensued in the early-to-mid 19th century. It was thus that No Treason was written in the hope of moderating the Constitution to ensure that slavery and bloody recriminations for secession would never again occur.

In life, many of Spooner's actions versus authority were successful; his abolitionism consisted of circulating pamphlets including those suggesting guerrilla warfare by slaves, and prefaced the Civil War. Later in life his challenge to the postal monopolies successfully resulted in such monopolies being regulated to the point where mailing became much cheaper for all. Furthermore he advanced a cogent theory of self-employment, believing it a way to laborers avoiding or reducing their exploitation by employers.