To Love and Be Loved: A Personal Portrait of Mother Teresa (Hardcover) 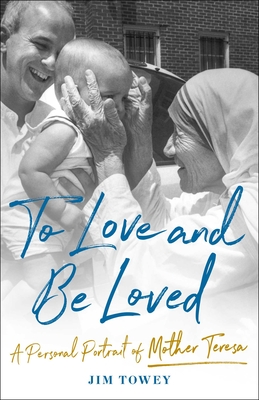 From a trusted advisor and devoted friend of Mother Teresa comes a “powerful” (The Washington Free Beacon) firsthand account of the miraculous woman behind the saint and a book that is “rich in reflection on contemporary sanctity” (George Weigel).

Mother Teresa was one of the most admired women of the 20th century, and her memory continues to inspire charitable work around the world. She believed the greatest need of a human being is to love and be loved. In 1948, she founded the Missionaries of Charity to work directly with the very poorest of Calcutta. From the efforts of one woman entering the slums of Entally, the Missionaries of Charity grew into an organization operating soup kitchens, health clinics, hospices, and shelters in 139 countries, at no cost to any government or to those who served. In 2016, she became Saint Teresa of Calcutta.

Author Jim Towey had been a high-flying Congressional staffer and lawyer in the 1980s until a brief meeting with Mother Teresa illuminated the emptiness of his life. He began volunteering at one of her soup kitchens and using his legal skills and political connections to help the Missionaries of Charity. When Mother Teresa suggested he take up shifts at her AIDS hospice, Towey realized he was all in. Soon, he gave up his job and possessions and became a full-time volunteer for Mother Teresa. He traveled with her frequently, arranged her meetings with politicians, and handled many of her legal affairs.

To Love and Be Loved is an “inspiring and joyful” (Kirkus Reviews) firsthand account of Mother Teresa’s last years, and the first book ever to detail her dealings with worldly matters. We see her gracefully navigate the opportunities and challenges to leadership, the perils of celebrity, and the humiliations and triumphs of aging. We also catch her indulging in chocolate ice cream, making jokes about mini-skirts, and telling the President of the United States he’s wrong. Above all, we see her extraordinary devotion to God and to the very poorest of His children. Mother Teresa taught Towey to be more prayerful, less selfish, more humble, less worldly, move in love with God, and less in love with himself. Her lessons are here for all to share.

Jim Towey was a trusted advisor and personal friend of Mother Teresa of Calcutta for twelve years, and did the first reading at her Mass of Canonization in Saint Peter’s Square. He headed the White House Office of Faith-Based and Community Initiatives under George W. Bush, and was president of two Catholic colleges, a US Senate staffer, and head of Florida’s 40,000-employee health and human services agency. In 1996, with Mother Teresa’s encouragement, he founded the nonprofit advocacy organization Aging with Dignity and created the Five Wishes advance directive, which has sold 40 million copies and is used in all fifty states. Towey met his wife, Mary, in Mother Teresa’s Washington, DC, AIDS home. He continues to provide pro bono legal services for the Missionaries of Charity.

Jim Towey’s To Love and Be Loved: A Personal Portrait of Mother Teresa is the loveliest book I’ve read in recent months, rich in reflection on contemporary sanctity and including one of the Five Funniest Catholic Stories Ever."

"Towey recounts the hours Mother Teresa spent daily in deep prayer as well as the cheerfulness and compassion with which she served people in crushing poverty...his retelling of his beloved friend’s persistent dark night of the soul makes the reader want to comfort her...Readers familiar with Mother Teresa’s biography will find fresh meaning in Towey’s account of her impact on his spiritual journey. Those unfamiliar with her life story will appreciate his accessible and gripping introduction."

"To Love and Be Loved: A Personal Portrait of Mother Teresa is a powerful "white pill," masterfully weaving together vignettes from Towey’s own life with the arc of the Albanian nun pursuing the will of God."

“Towey portrays Mother Teresa in trademark sandals and sari, and also as a human who experienced loneliness, wrestled with doubts, and loved sweets…This personal portrait is by turns autobiographical, biographical, and devotional. Especially moving are the stories of Mother Teresa’s vivid calling through a vision, her dark night of the soul, and her final decline.”
—Booklist