A Billion Years: My Escape From a Life in the Highest Ranks of Scientology (Hardcover) 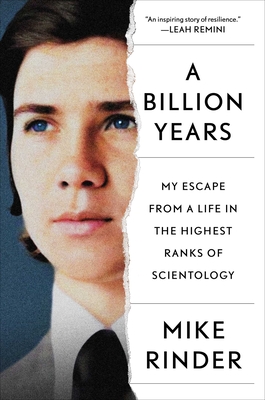 One of the highest-ranking defectors from Scientology exposes the secret inner workings of the powerful organization in this remarkable memoir.

Mike Rinder’s parents began taking him to their local Scientology center when he was five years old. After high school, he signed a billion-year contract and was admitted into Scientology’s elite inner circle, the Sea Organization. Brought to founder L. Ron Hubbard’s yacht and promised training in Hubbard’s most advanced techniques, Mike was instead put to work swabbing the decks.

Still, Rinder bought into the doctrine that his personal comfort was secondary to the higher purpose of Hubbard’s world-saving mission, swiftly rising through the ranks. In the 1980s, Rinder became Scientology’s international spokesperson and the head of its powerful Office of Special Affairs. He helped negotiate Scientology’s pivotal tax exemption from the IRS and engaged with the organization’s prominent celebrity members, including Tom Cruise, Lisa Marie Presley, and John Travolta.

Yet Rinder couldn’t shake a nagging feeling that something was amiss—Hubbard’s promises remained unfulfilled at his death, and his successor, David Miscavige, was a ruthless and vindictive man who did not hesitate to confine many top Scientologists, Mike among them, to a makeshift prison known as the Hole.

In 2007, at the age of fifty-two, Rinder finally escaped Scientology. Overnight, he became one of the organization’s biggest public enemies. He was followed, hacked, spied on, and tracked. But he refused to be intimidated and today helps people break free of Scientology.

In A Billion Years, the dark, dystopian truth about Scientology is revealed as never before. Rinder offers insights into the religion that only someone of his former high rank could provide and tells a harrowing but fulfilling story of personal resilience.

Mike Rinder was raised as a Scientologist from early childhood. He went on to serve as Scientology’s international spokesperson and as the head of its Office of Special Affairs and was a member of the Board of Directors of Church of Scientology International from its creation in 1983 until he left in 2007. Since renouncing Scientology, Rinder has become a prominent whistleblower against its abuses. He appeared in the HBO documentary Going Clear and cohosted all three seasons of the Emmy Award–winning show Leah Remini: Scientology and the Aftermath on A&E. He and Remini currently cohost the podcast Scientology: Fair Game.

“[Rinder’s] voice is crisp, urgent, and vividly impassioned, whether assessing his years as a compliant member, his breathless escape, or his promise to continue exposing Scientology as a ‘unique and vengeful monster.’ An intensely personal, cathartic memoir of blind allegiance, betrayal, and liberation.”
—Kirkus, starred review

“Few people understand Scientology like Mike Rinder does. In A Billion Years, he tells the gripping, harrowing account of growing up in Scientology, serving founder L. Ron Hubbard, and rising to the top of its ranks. Mike has found purpose in his pain and his book offers not only a cautionary tale but also an inspiring story of resilience.”
—Leah Remini, New York Times bestselling author of Troublemaker

“A Billion Years is an extraordinarily powerful book. It is an essential account from the inside, and while it’s a devastating exposé of the abuses of the church, the tone is measured and deeply humanistic. Rinder lets us feel what it’s like to fall into a state of blind faith, and how hard it is to break free and see the truth for what it is. Nothing could be more relevant to our current moment.”
—Alex Gibney, Oscar-winning director of Taxi to the Dark Side and Going Clear

“Mike Rinder has written the definitive book on the great threat of Scientology in the twenty-first century. It’s a flamethrower of a read, burning up the organization’s wicked nonsense so all that is left is like so much ash in the ashtray. Read it.”
—John Sweeney, investigative journalist and presenter of BBC Panorama’s Scientology and Me and The Secrets of Scientology