The Windsor Diaries: My Childhood with the Princesses Elizabeth and Margaret (Hardcover) 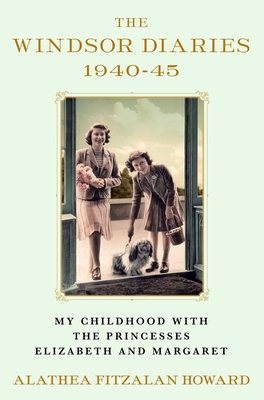 The never-before-published diaries of Alathea Fitzalan Howard—who spent her teenaged years living out World War II in Windsor Great Park with her close friends Princess Margaret and Princess Elizabeth, the future queen of the United Kingdom—provide an extraordinary and intimate look at the British Royal Family.

Like so many others in Great Britain, young Alathea Fitzalan Howard’s life was turned upside down by the start of the Second World War. Sent to stay with her grandfather at the historic Cumberland Lodge in Windsor Great Park, Alathea found the affection she so craved through her close friendship with the two princesses Elizabeth and Margaret, and their parents King George VI and Queen Elizabeth, her neighbors at nearby Windsor Castle.

Together, the girls enjoyed parties, cinema evenings, picnics, and more, all recorded in honest and captivating detail in Alathea’s diary, which she kept as a constant source of comfort. Day by day, from ages sixteen to twenty-two, she recorded the intimate details of her life with the Royal Family and the anxieties of wartime Britain. Now, published for the first time, these unique diaries unveil a candid and vivid portrait of the British Royal Family and of Princess Elizabeth in particular, the warm, quiet young girl who was already on her journey to her ultimate destiny: the Crown.

Alathea Fitzalan Howard was born in 1923 and spent the war years alongside the Royal Family at Windsor. She died in 2001.

"A dedicated and meticulous diarist, unfailingly recording the goings-on of her life as the royal family’s welcome interloper.... Howard’s observations imbue the reader with an intimacy of the casual, everyday life of 20th-century British royalty."
— Vanity Fair

"As bombs fell on London during World War II, a young Alathea was whisked to relative safety. The house next door? Windsor Castle. Her new best friends? Princess Margaret and the warm, awkward Princess Elizabeth, heir to the throne. They enjoy picnics, parties, outings to the movies and more, all of it lovingly captured in the diaries Alathea kept for years. This is a rare, behind-the-scenes glimpse at the young royals."
— Parade

"Reveals never-before-heard stories about Elizabeth and Margaret, bringing the young princesses’ private teenage lives into public view. Acting as both a historical document and an engaging series of vignettes, Howard’s diary entries give new insight into the British royal family."
— Town & Country

"A must-read for all fans of The Crown and royal devotees."
— Verandah

"I loved reading this. So reminiscent of my own childhood."
— Anne Glenconner, author of LADY IN WAITING

"A compelling and revealing insight into the teenage life of the then Princess Elizabeth and her sister Princess Margaret."
— Daily Mail

"Fascinating insight into Elizabeth as a teenager."
— OK! Magazine

“Perfect for fans of 'The Crown,’ this is the kind of book you want to curl up with next to a roaring fire or on your next vacation. A fascinating, eyewitness account of the British Royal Family’s private life against the backdrop of the Second World War, ’The Windsor Diaries’ shows the King, the Queen, and the two princesses through the eyes of a girl who was invited into their home during Britain’s darkest hour. I could not put it down.”
— Gareth Russell, author of The Ship of Dreams

"A captivating behind-the-scenes look at the royal family...intimate and endearing."
— Publishers Weekly

"An insider account that is essential for followers of the royal family."
— Library Journal