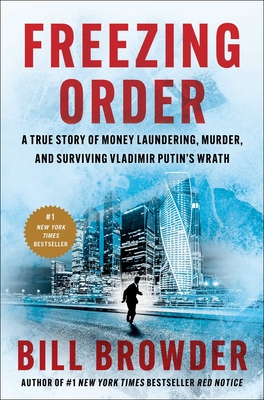 Following his explosive New York Times bestseller Red Notice, Bill Browder returns with another gripping thriller chronicling how he became Vladimir Putin’s number one enemy by exposing Putin’s campaign to steal and launder hundreds of billions of dollars and kill anyone who stands in his way.

When Bill Browder’s young Russian lawyer, Sergei Magnitsky, was beaten to death in a Moscow jail, Browder made it his life’s mission to go after his killers and make sure they faced justice. The first step of that mission was to uncover who was behind the $230 million tax refund scheme that Magnitsky was killed over. As Browder and his team tracked the money as it flowed out of Russia through the Baltics and Cyprus and on to Western Europe and the Americas, they were shocked to discover that Vladimir Putin himself was a beneficiary of the crime.

As law enforcement agencies began freezing the money, Putin retaliated. He and his cronies set up honey traps, hired process servers to chase Browder through cities, murdered more of his Russian allies, and enlisted some of the top lawyers and politicians in America to bring him down. Putin will stop at nothing to protect his money. As Freezing Order reveals, it was Browder’s campaign to expose Putin’s corruption that prompted Russia’s intervention in the 2016 US presidential election.

At once a financial caper, an international adventure, and a passionate plea for justice, Freezing Order is a stirring morality tale about how one man can take on one of the most ruthless villains in the world—and win.

Bill Browder is the founder and CEO of Hermitage Capital Management and was the largest foreign investor in Russia until 2005. Since 2009, when his lawyer, Sergei Magnitsky, was murdered in prison after uncovering a $230 million fraud committed by Russian government officials, Browder has been leading a campaign to expose Russia’s endemic corruption and human rights abuses. Before founding Hermitage, Browder was vice president at Salomon Brothers. He holds a BA in economics from the University of Chicago and an MBA from Stanford Business School.

"An essential work by someone who understood long before the rest of the world did just how far corrupt Russian officials and businesspeople will go to defend their ill-gotten wealth, and how foreign lawyers, lobbyists and public relations firms enable them... Browder’s Freezing Order is not just a cracking good read — it is a reminder of the urgency of addressing the global plague of money laundering."— The Washington Post

"Reading Bill Browder’s zesty new book about the theft, extortion, intimidation, lies and murder that are the Russian state’s daily levers of power can feel like reading several books at once. One, a breakneck financial thriller compelling breathless attention; another, a true story, crisply told, of a country’s looting on a gigantic scale; a third, a morality tale of how liars first have to carry on lying, then simply abolish the truth; and fourth, and not least, a stimulating essay on Vladimir Putin’s motivation that sheds light on his monstrous war in Ukraine." — The Telegraph (UK) (5 out of 5 stars)

"Freezing Order could not have come at a better time. It is among a crop of excellent recent books about Russia…If its subject matter weren’t so grave, the book could be said to have all the elements of a high-octane drama. Murder. Conspiracy. Piles of dirty money. Sexual intrigue. Freezing Order shudders with the constant threat of assassination, abduction or sudden, extreme violence. It is a tense and gripping read…Good stories cut through, and this is one of them. Bearing witness to wrongdoing is a necessary step in reversing it. A book can be a kind of justice in itself." — The Time (UK)

"Could not be more timely in illustrating why the support of Russia’s super-rich and their funds have become crucial to Putin’s powerbase." — The Independent (UK)

"Browder has made his story into a real page-turner. Amid the horrors being reported every day from Ukraine, it also provides a highly readable insight into the true nature of the regime that is responsible for them." — The Sunday Times (UK)

"Rarely do you come across such an important book that is at the same time so worth reading." — Vårt Land (NO)

"Bill Browder’s new book on the Magnitsky affair follows the money all the way to the top of Russia’s murderous kleptocracy. Freezing Order ought to be compulsory reading. Luckily it reads like a thriller." —Tom Stoppard

"More explosive, compulsive and gasp-inducingly, spine-tingingly, mouth-dryingly, heart-poundingly thrilling than any fiction I have read for years. FREEZING ORDER has a stunning plot — international conspiracy, hidden rings of power and corruption, a dark threat to any hope of world order – but with this stunning twist: it is all true. Browder – with incredible courage, resilience and grace, and always at great risk to his personal safety and freedom – continues to chase after Putin and his henchmen. This is real heroism, and what a cracking good read it makes for." —Stephen Fry

"A gripping tale of assassinations, legal battles, and billions in cash. It would be entertaining fiction, but it is a true story that serves as a roadmap for fighting back against the crime and corruption from Putin’s Russia. Browder shows that one man with courage can make a difference. It’s an inspiring message we should all heed with urgency." —Garry Kasparov, Chairman of the Renew Democracy Initiative

"Mind-blowing. This personal account of Browder's battle for justice is at times terrifying, at times deeply touching— and leads inexorably to a vast money laundering scheme the Kremlin will stop at nothing to cover up." — Catherine Belton, author of Putin’s People

“Browder’s account of how he stood up to Putin in the face of danger, arrest warrants, and bullying is mandatory reading for anyone who wants to understand the tactics of modern autocracy.” — Anne Applebaum, Pulitzer-Prize winning historian and author of Twilight of Democracy

"Browder's thrilling new book explores the dark heart of corruption. It asks what one person can do in the face of such insidious corruption, and what we can find in ourselves to stand up and resist those forces that would steal, deceive and murder for their own gain." — Eliot Higgins, founder of Bellingcat

"The content will blow your mind... Sure, it’s pretty horrifying watching the images from Ukraine. But you need to go to the source, the man pulling the levers, and that’s Vladimir Putin. And Bill Browder has more experience with Putin than just about anybody. He’s been talking, but not enough people are listening. If you read these books you’ll know more about what’s happening in Russia than not only the people in your neighborhood, but many on TV! All you have to do is read them." — The Lefsetz Letter

"A must-read for fans of Red Notice... Revealing and damning, exposing Putin and his minions as little more than greedy international criminals. A timely book combining mystifying financial shenanigans with a fast-paced crime saga." — Kirkus Reviews

"Riveting...An eye-opening exposé of the lengths Putin’s cronies will go to hide their crimes and punish their accusers." — Publishers Weekly