A Star Trek: The Next Generation: Time #9: A Time for War, A Time for Peace (Paperback) 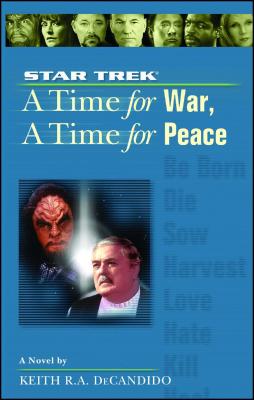 The shattering conclusion to the nine-book Next Generation series that chronicles the untold adventures of the Enterprise crew between the events depicted in the feature films Star Trek: Insurrection and Star Trek Nemesis!

On the cusp of their epic battle with Shinzon, many of Captain Jean-Luc Picard's long-time crew were heading for new assignments and new challenges. Among the changes were William Riker's promotion to captain and his new command, Riker's marriage to Counselor Deanna Troi, and Dr. Beverly Crusher's new career at Starfleet Medical. But the story of what set them on a path away from the Starship Enterprise™ has never been told.

Following the scandalous Tezwa affair, the Federation president's resignation forces an election, with the future of the United Federation of Planets to be determined by who emerges victorious from a hotly contested vote. But it is the fate of the entire galaxy that may actually be decided on Qo'noS, as the Federation embassy is seized by terrorists whose actions expose intrigue reaching the highest levels of Klingon government—and it will take all of Ambassador Worf's skills to keep the fragile Federation-Klingon alliance from collapsing. And while this potential intergalactic chaos looms, Commander Riker finds his plans for command and marriage soured by a brutal, high-level inspection of the ship from which the crew may not escape unscathed...

The epic miniseries comes to a shocking conclusion—one that will leave the Star Trek universe changed forever!

Keith R.A. DeCandido was born and raised in New York City to a family of librarians. He has written over two dozen novels, as well as short stories, nonfiction, eBooks, and comic books, most of them in various media universes, among them Star Trek, World of Warcraft, Starcraft, Marvel Comics, Buffy the Vampire Slayer, Serenity, Resident Evil, Gene Roddenberry’s Andromeda, Farscape, Xena, and Doctor Who. His original novel Dragon Precinct was published in 2004, and he's also edited several anthologies, among them the award-nominated Imaginings and two Star Trek anthologies. Keith is also a musician, having played percussion for the bands Don't Quit Your Day Job Players, Boogie Knights, and Randy Bandits, as well as several solo acts. In what he laughingly calls his spare time, Keith follows the New York Yankees and practices kenshikai karate. He still lives in New York City with his girlfriend and two insane cats.