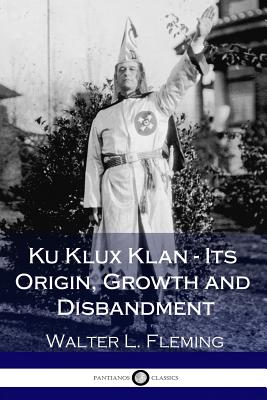 The KKK's early history from its formation to its first disbandment is revealed with astonishing detail - writing in 1905, the author includes eyewitness accounts from those alive at the time.
Following the American Civil War, the emancipation of black Americans occurred - the peoples formerly owned by plantation owners and farmers were accorded freedom, citizenship and rights as citizens of the United States. However, a significant segment of the population were unhappy with the emancipation of the enslaved - a desire for white domination led many, particularly in the Deep South, to perpetrate violence, mischief and murder.
In the southern states, six former officers of the Confederate States of America formed the Ku Klux Klan. Intentionally shrouding the initiation ceremonies, doctrines and customs in mystery, the group was formed to amuse its members and attract public curiosity. Only later, as the group gained in membership and perpetrated violent and murderous acts, did their white hoods and rituals acquire notoriety and become synonymous with white supremacy and menace against the black minority.
This book details the formation and progress of the 1st Klan, which operated between the years 1865 and 1871. Authored in 1905, it benefits from eyewitness accounts; at the time, the KKK's first appearance was within living memory, thought a curious event firmly confined to the past. However, a decade after Fleming published this book the KKK was revived, becoming far larger than before.
Although overshadowed by later events, histories such as Fleming's shed light on an era of upheaval. Backlash against emancipation was anticipated, and the KKK was not the only extra-judicial group of its kind; although such organizations successfully intimidated many blacks into departing politics, laws and crackdowns by the government contained the organization, albeit temporarily.