Josephus, Paul, and the Fate of Early Christianity: History and Silence in the First Century (Paperback) 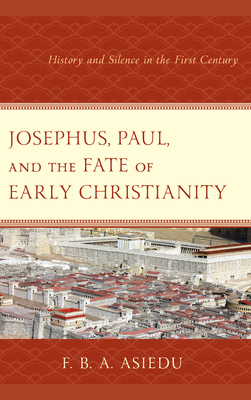 Flavius Josephus, the priest from Jerusalem who was affiliated with the Pharisees, is our most important source for Jewish life in the first century. His notice about the death of James the brother of Jesus suggests that Josephus knew about the followers of Jesus in Jerusalem and in Judaea. In Rome, where he lived for the remainder of his life after the Jewish War, a group of Christians appear to have flourished, if 1 Clement is any indication. Josephus, however, says extremely little about the Christians in Judaea and nothing about those in Rome. He also does not reference Paul the apostle, a former Pharisee, who was a contemporary of Josephus's father in Jerusalem, even though, according to Acts, Paul and his activities were known to two successive Roman governors (procurators) of Judaea, Marcus Antonius Felix and Porcius Festus, and to King Herod Agrippa II and his sisters Berenice and Drusilla. The knowledge of the Herodians, in particular, puts Josephus's silence about Paul in an interesting light, suggesting that it may have been deliberate. In addition, Josephus's writings bear very little witness to other contemporaries in Rome, so much so that if we were dependent on Josephus alone we might conclude that many of those historical characters either did not exist or had little or no impact in the first century. Asiedu comments on the state of life in Rome during the reign of the Emperor Domitian and how both Josephus and the Christians who produced 1 Clement coped with the regime as other contemporaries, among whom he considers Martial, Tacitus, Pliny the Younger, and others, did. He argues that most of Josephus's contemporaries practiced different kinds of silences in bearing witness to the world around them. Consequently, the absence of references to Jews or Christians in Roman writers of the last three decades of the first century, including Josephus, should not be taken as proof of their non-existence in Flavian Rome.

F. B. A. Asiedu is a visiting scholar at Duke University.