The Tweets of President Donald J. Trump: The Most Liked and Retweeted Tweets from the Inauguration through the Impeachment Trial (Paperback) 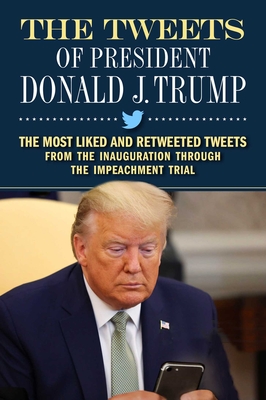 Love them or hate them, the tweets of President Donald J. Trump rule the Twitterverse.

Until our last presidential campaign, television, particularly campaign ads, dominated the political landscape. But with the rise of Donald J. Trump came a new political tool: the internet. Trump used this to communicate instantly and very effectively with the American people.

And it worked. Establishing his political positions by tweeting numerous times a day, Trump pulled a major upset by defeating Hillary Rodham Clinton to become the 45th president of the United States.

Once in office, Trump did not abandon his penchant for using Twitter as his populist platform. Instead, he doubled down on it, making it his primary means of communicating with the American people.

Knowing how effective a tweet can be, Trump once wrote, “Boom. I press it and within two seconds we have breaking news.”

With a massive Twitter following of 78 million by the spring of 2020, Trump’s direct impact upon Americans cannot be dismissed, nor can the value of his tweets as an essential part of the historical record be denied. To put the enormous impact of his tweets into perspective, Trump won the White House with 63 million votes—a number significantly lower than his massive Twitter following.

Now you can read the collected tweets from President Donald J. Trump, from his inauguaration through February 2020 in this historically significant collection.

The Editors of Forefront Books