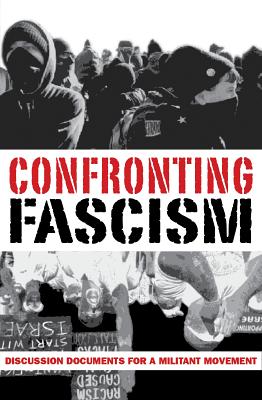 Confronting Fascism: Discussion Documents for a Militant Movement is a series of documents that came out of conversations revolutionaries in and around Anti-Racist Action were having at the highpoint of the previous wave of antifascist organizing in North America.

Originally published in 2002 as a collaboration between Kersplebedeb, ARA Chicago, and the anarchist magazine Arsenal, Confronting Fascism is structured around a text by Don Hamerquist, "Fascism & Antifascism." Hamerquist takes a wrecking ball to the mythology around fascism that had been traditionally peddled by the reformist left; against objections that fascists are just a distraction, or are simple-minded agents of the state and capital, he shows how fascism contains a revolutionary and even anticapitalist impulse thoroughly enmeshed with its own deeply oppressive and anti-liberatory politics. Unraveling what this means for antifascists and our strategies is the task at hand, and Hamerquist proceeds to lay down some important preliminary realities that we need to deal with. Almost twenty years later, what is most striking is how prescient so many of Hamerquist's observations were, not only about the ambiguously dynamic appeal of fascism, but also about the specific characteristics of antifascist work and the advantages and disadvantages they confer.

J. Sakai follows, arguing against the idea that fascism comes primarily from the working class, just as he extends the point that fascism is not an inherently or essentially "white" ideology. A discussion of different forms of capitalist rule, the class structure of global imperialism, and the history of anticapitalist critique within both Italian and German "classical" fascism, flows into a contemporary contextualization of fascism within the neocolonial context; throughout, Sakai shows that support for fascism comes primarily from middle class men who are losing or being denied their traditional privileges, what many consider their birthrght, as a result of capitalist and imperialist "progress."
Shorter texts from the ARA Research Bulletin, Mark Salotte, and Xtn of ARA Chicago place these theoretical insights in the concrete context of the political and physical fight against the far right, while also recovering the connections between this fight and the broader rise of anticapitalist struggle at the time.
Confronting Fascism attempts to deal with the questions of fascism and antifascism in a serious and non-dogmatic manner. Attention is paid to the class appeal of fascism, its continuities and breaks with the "regular" far-right and also even with the Left, the ways in which the fascist movement is flexible and the ways in which it isn't. Left failures, both in opposing fascism head-on, and also in providing a viable alternative to right-wing revolt, are also dealt with at length. The lived experiences of anti-fascist activists inform this work, and more attention is paid to actual historical developments and facts than to neat theories that explain everything but only coincidentally intersect with reality. Understanding the relationship of fascism, the State, left reformism and what it means to be revolutionary are priorities in a world where it seems increasingly true that those who do not advance will have to retreat.