A Day Like Any Other: The Great Hamptons Hurricane of 1938: A Novel (Hardcover) 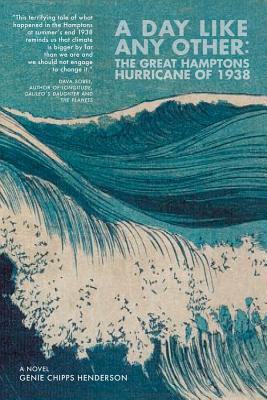 A bucolic resort setting -- the summer colony and locals are caught in the path of a sudden and devastating hurricane in this brilliant and prophetic fiction that is a warning of storms to come.

“For those few who still remember, the images are seared into their brains: the corpses floating down Main Street; the boats that drifted into the living rooms of flooded houses; the dead dogs and featherless chickens; the muck and fish stink; the moonscape of flattened houses; the residue of the last great hurricane to hit Long Island, the storm of 1938. “ - The New York Times

This is a story of that day – a day that began much like any other day at the ragtag end of the summer season on the eastern end of Long Island – better known as The Hamptons. The storm came without warning landing at three in the afternoon bringing with it unprecedented wind and rain and waves so high and powerful they were recorded on seismographs 5000 miles away in Alaska.

But A DAY LIKE ANY OTHER is not just a hurricane novel. The storm is a framing device for an historical tableau vivant of this near mythical place – The Hamptons – brought to life via the stories of townspeople, the wealthy summer colony, the fishing folk and the art crowd. Written by a natural tale-spinner and masterful portraitist of character and place, it does have one wild, furious storm at its center – an historic tempest that wreaked havoc on the little towns and villages that line the ocean front of the South Fork of Long Island.

Could it happen again? Yes - it will almost certainly happen again and no matter how many moguls build seaside monuments defying the odds, another hurricane like 1938 will surely be the deadliest in American history.

Genie Chipps Henderson is a writer and documentary videographer specializing in stories and histories of the East End of Long Island – her home. Her previous novel, A Woman of the World, was named one of the top debut novels of the year by Publishers Weekly.

The once-scenic Dutch elm–lined main streets of the Hamptons serve as both a reminder of a more genteel time and an omen of things to come in Henderson’s keenly observed and skillfully structured historical novel. The dark cloud on the horizon is the Great New England Hurricane, which will devastate the islands on September 21, 1938. The story opens on that ominous morning, then jumps back to June, when wealthy Manhattanites decamp to their summer homes and the locals grudgingly welcome their primary source of income. As Henderson subtly and cleverly ratchets up the suspense, she presents a richly textured exploration of class and society filtered through the lenses of several characters whose lives are thrown off course.

This psychologically astute tale calls to mind Auden’s famous words, “As the clever hopes expire / Of a low dishonest decade / Waves of anger and fear / Circulate over the bright / And darkened lands of the earth, / Obsessing our private lives; / The unmentionable odour of death / Offends the September night.” For readers of Richard Russo and Elizabeth Strout.

A Day Like Any Other is an understated title for this richly detailed, knowledgeable and engrossing novel set in a beautiful part of the world at a cataclysmic time. Though hellish to experience, historic hurricanes are fascinating to track in prose.
— Joyce Carol Oates

Nature’s fury, social mischief, human passion -- this vividly reimagined impact of the 1938 killer hurricane on a storied community is riveting fiction that gets at the truth of our own lives. You’ll never see the Hamptons – or a sudden rainstorm – the same way again. Wow. Another perfect storm. I loved it.

This terrifying take on what happened in the Hamptons at summer’s end, 1938, reminds us that climate is bigger by far than we are, and we should not engage in changing it.

In this age of sound bites and superficiality, here, miraculously, is a richly textured novel that takes its time in the interest of a bigger emotional payoff for its grateful readers. Genie Chipps Henderson has conjured fact-based fiction that reads credibly and poignantly as it explores the complexities of our flawed humanity and the sometimes-fierce vagaries of weather.
— Wally Lamb, author of She’s Come Undone and I Know This Much Is True