The Story of the Romans: A History of Ancient Rome for Young Readers - its Legends, Military and Culture as a Republic and Empire (Paperback) 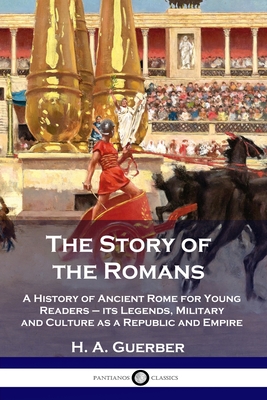 From the earliest hill tribes to the cultural peak of the Pax Romana, and finally to the Western Empire's chaotic decline - H. A. Guerber's history of Rome is superb for young readers.

The legends that accompanied the founding of the Roman Republic were part of the popular consciousness; the twin boys Romulus and Remus, raised by a wolf, going on to found Rome. First ruled by kings, Rome transitioned to a republic, with a ruling Senate and offices. The author mixes legend with the known facts of the era; that Italy was divided into tribes such as the Etruscans and the Latins. The feuds between these groups were gradually consigned to the past, as all of Italy united under a single, Roman culture.

Yet there were threats to the young nation; to the South, across the Meditteranean Sea, was the prosperous Carthage. To the north were the Gallic tribes. Overcoming these established Rome as the strongest power of Europe. However, political infighting led to the end of the Republic's government: beginning with Augustus, Rome was an Empire - with very much political power concentrated in the hands of the Emperor.

In this illustrated and well-written history, H. A. Guerber successfully summarizes the feats and accomplishments of classical Rome.