Putin's Russia: The Rise of a Dictator (Paperback) 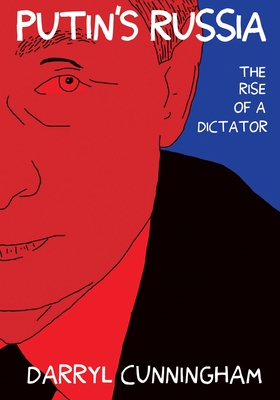 From schoolyard thug to Russian president: Putin’s rise to power comes under the microscope

Darryl Cunningham (Billionaires) returns with the riveting life story of Vladimir Putin, Russia’s infamous autocrat. He traces Putin’s development from schoolyard thug in Soviet-era Leningrad, to KGB officer, to corrupt commodities dealer, all the way to his presidency and beyond. In this educational and frank biography, Putin’s journey is characterized by shifting loyalties, brutal treatment of detractors, and lawless financial dealings. Despite all of this, Putin has retained public support and tremendous importance in Russian society, due to his ever-tightening control over the media and harsh muzzling of critics.

Born in 1952, Putin grew up idealizing the KGB, and he became a member of its ranks by early adulthood. Cunningham posits that the speed with which Putin advanced politically was a reflection of the KGB’s need to cement their control of the Russian political system after the dissolution of the Soviet Union in 1991. Since Boris Yeltsin appointed him to the presidency in 2000, Putin has annexed Crimea, rolled back democratic reforms, and led a life of luxury, all the while fostering a cult of personality. In Putin's Russia, Cunningham situates the contentious leader in an analytical framework that is at times hilarious and always compelling.

"Cunningham, who last detailed the rich and powerful in this country in 'Billionaires,' returns with the life story of Vladimir Putin, a tale that allows him to recount the history of post-Soviet Russia."—New York Times

"This is an important book that can get everyone up to speed on the grisly facts and trail of bodies piled up under Russia’s leader, and serve as a counterargument to those who try to hold his regime up as a viable alternative to liberal democracy."—Forbes

"An infuriated and eye-opening guide to a real-life supervillain."—Publishers Weekly

"Putting the autocratic leader under a microscope, Cunningham paints a terrifying picture of Vladimir Putin’s reign over Russia."—ALA Booklist

"I read this before Russia invaded Ukraine and was struck by how enlightening this book seemed then."—Thrillist

"Cunningham’s spare drawings, filled with blank space, allow for the unspoken to be revealed."—The Tyee