Joe Biden Unauthorized: And the 2020 Crackup of the Democratic Party (Paperback) 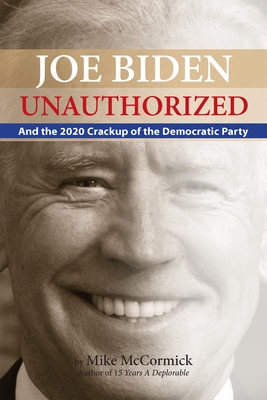 Origins of Joe's collaboration with drug cartels in the Northern Triangle, check. Want to know how bad it can get for America? Read this truth about the man who was constitutionally installed as our president. And understand that this book was published just before the 2020 COVID shutdowns as a warning to Americans about the real Joe Biden. Now that the world is paying the price for his fraudulent election, it's critical to know the true nature of this terrible leader. Fast-paced and full of insider knowledge, this book REVEALS Joe Biden's MALFEASANCE for using his Office of the Vice President to enrich his son Hunter in a quid pro quo as he directed U.S. assistance to Ukrainian natural gas company Burisma Holdings in 2014. Mike McCormick's eyewitness account is clear and accurate because he WAS THERE in Ukraine and Poland with Joe Biden, as his stenographer. This book EXONERATES President Donald Trump from his first impeachment because he was right to ask for an investigation into a corrupt former vice president What's worse for the Democrats - from 2014 to the present, Barack Obama is GUILTY OF CONSPIRING with his senior advisors to cover up Joe Biden's malfeasance in Ukraine. By the way, have you heard any reporting by the corporate media about Joe Biden's malfeasance or the Obama White House covering it up? Nowhere but here. But this book is about far more than Joe and Hunter's crooked dealings in Ukraine. Voters who think Joe Biden is strong enough to lead America should read how he was humiliated by Vladimir Putin in Moscow during the Russian "reset". Voters who think Joe Biden cares about America should know he gifted $1.5 billion in taxpayer money to Honduran drug dealers and corrupt government leaders in Guatemala and El Salvador. That's the origin of Biden's southern border crisis. Voters who claim Joe Biden is a foreign policy expert should read how he was careless, conniving, and weak in China and Turkey - reported nowhere but here Democrats who promoted Joe Biden as their best hope in the 2020 election are in for a serious reckoning as forensic auditors scour the ballots nationwide. The Democratic Party is CRACKING UP and the reasons are in this book, especially in the chapters titled -- Joe Will Do Iraq and Donors and Drug Dealers. The clues of Joe Biden's corruption and ineptitude were glossed over by corporate media for years. Joe Biden was never qualified to be president. He was not legally elected president of the United States, and the Democratic Party will rue the day they pretended he was. Don't say you weren't warned