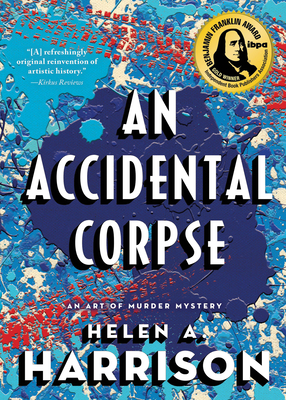 This is book number 2 in the Art of Murder Mysteries series.

Accidents happen. But so does murder…

On the night of August 11, 1956, in a quiet East Hampton hamlet, Jackson Pollock crashed his car into a tree. The accident killed Pollock, the world-renowned abstract painter and notorious alcoholic, and his 25-year old passenger, Edith Metzger…or did it?

Metzger's autopsy reveals that she was already dead before the crash. Was it murder?

This shocking question draws vacationing Detective Juanita Diaz and her husband, Captain Brian Fitzgerald, of the NYPD into a homicide investigation that implicates famous members of East Hampton's art community—including Pollock himself.

Helen A. Harrison, a former art reviewer and feature writer for The New York Times and visual arts commentator for National Public Radio, is the director of the Pollock-Krasner House and Study Center in East Hampton, New York, and an authority on 20th century American art. A native of New York City with a bachelor’s degree in studio art from Adelphi University, she also attended the Art Students League, the Brooklyn Museum Art School and Hornsey College of Art in London before receiving a master’s degree in art history from Case Western Reserve University. Among her many publications are exhibition catalogs, essays, book chapters, reviews and articles, and several non-fiction books, including Hamptons Bohemia: Two Centuries of Artists and Writers on the Beach, co-authored with Constance Ayers Denne, and monographs on Larry Rivers and Jackson Pollock. She and her husband, the artist Roy Nicholson, live in Sag Harbor, New York. www.helenharrison.net.

"Have fun—you may feel inspired to look up and refresh your memory of the artists, their art, and their very provocative stories." — Kingdom Books