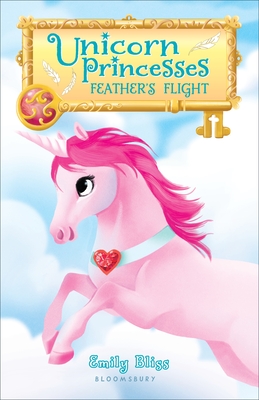 This is book number 8 in the Unicorn Princesses series.

Welcome to an enchanted land ruled by unicorn princesses!
Cressida Jenkins, a unicorn-obsessed girl who is sure that unicorns are real, is invited to visit, and readers will be thrilled to journey to the Rainbow Realm along with her! In each story, Cressida is called to help a unicorn princess and her sisters in a magical adventure.

Cressida is surprised to learn that there is an eighth Unicorn Princess named Feather whose magical ruby allows her to fly! Feather is an explorer, and she's back from her latest adventure. To celebrate, she planned a super-fun sleepover for her sisters and Cressida in the Sky Castle, complete with special pajamas that will allow their wearers to fly! But Ernest the wizard lizard once again casts an errant spell that will require all of the magic of the Unicorn Princesses--and some from Cressida too--to save the day.

This magical series is full of sparkle, fun, and friendship.