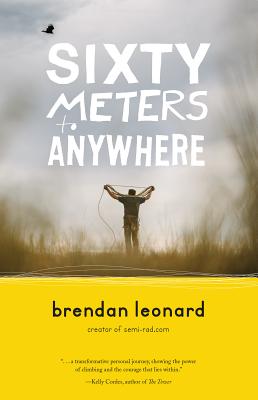 By Brendan Leonard
$16.99
Email or call for price.


**CLICK HERE to sign up and download a free chapter from Sixty Meters to Anywhere** When Brendan Leonard finished substance abuse treatment at age 23, he was lost. He knew what not to do--not drink alcohol and not get arrested again. But no one had told him what it was that he could do. He quickly realized that he had to reinvent himself, to find something other than alcohol and its social constructions to build his life around. A few years later, Brendan was sober and had completed a graduate degree in journalism, but he still felt he was treading water, searching for direction. Then his brother gave him a climbing rope. And along that sixty-meter lifeline, Brendan gradually found redemption in the crags of the American West. He became a climber, someone who learned to push past fear, to tough it out during long, grueling days in the mountains; someone who supported his partners, keeping them safe in dangerous situations and volatile environments; someone with confidence, purpose, and space to breathe. Sixty Meters to Anywhere is the painfully honest story of a life changed by climbing, and the sometimes nervous, sometimes nerve-wracking, and often awkward first years of recovery. In the mountains, Leonard ultimately finds a second chance.