The Betrayal of Mary, Queen of Scots: Elizabeth I and Her Greatest Rival (Hardcover) 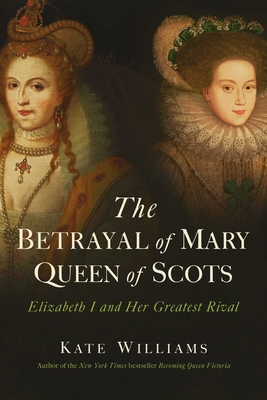 By Kate Williams
Email or call for price.
Out of Print

From the New York Times bestselling author of Becoming Queen Victoria, a new history of Mary Queen of Scots and Elizabeth I that reveals how the most important relationship of their life—their friendship—changed them forever.

Elizabeth and Mary were cousins and queens, but eventually it became impossible for them to live together in the same world.This is the story of two women struggling for supremacy in a man’s world, when no one thought a woman could govern. They both had to negotiate with men—those who wanted their power and those who wanted their bodies—who were determined to best them. In their worlds, female friendship and alliances were unheard of, but for many years theirs was the only friendship that endured. They were as fascinated by each other as lovers; until they became enemies. Enemies so angry and broken that one of them had to die, and so Elizabeth ordered the execution of Mary.But first they were each other’s lone female friends in a violent man’s world. Their relationship was one of love, affection, jealousy, antipathy – and finally death. This book tells the story of Mary and Elizabeth as never before, focusing on their emotions and probing deeply into their intimate lives as women and queens.They loved each other, they hated each other—and in the end they could never escape each other.

Kate Williams is the author of the New York Times bestseller Becoming Queen Victoria, which was the inspiration for the Academy Award-winning film The Young Victoria, starring Emily Blunt and Rupert Friend as Queen Victoria and Prince Albert. She is also the author of Ambition & Desire, a biography of Josephine Bonaparte. Kate works as CNN's British royalty and historical expert. She lives in England.

"Williams expertly and entertainingly details the twisty and sordid path to the monarch’s execution. In framing Mary’s story as being one about ‘how we really think of women and their right to rule,’ Williams hints at its ongoing resonance."
— Christian Science Monitor

"A sharp new history of two adversarial monarchs. Though parts of the story may be well-known to readers of royal history, Williams injects enough fresh viewpoints to make it a satisfying whole."
— Publishers Weekly

"A refreshing, engaging biography. Tudor-Stuart enthusiasts will appreciate the greatly vibrant tone in this account."
— Booklist

"Kate Williams has succeeded brilliantly in bringing us a fresh Mary—one who she has set in a gloriously rich context, while making her tragic heroine irresistibly real and relevant. But the true triumph of this book lies in the perfect balancing of Williams’s excellent research with the need to keep the pages turning. Its pace is perfect, and there isn’t a line wasted in this taut, dramatic, and utterly beguiling biography."
— Charles Spencer, author of To Catch a King

"There is much to cover in this elegant synthesis of royal biography and political thriller, and Williams is adroit in her handling of it. A scintillating, provocative analysis of Mary and Elizabeth’s reigns and their relationship."
— The Telegraph (UK)

"Looks past tired stereotypes to give fresh insights into Mary’s tumultuous life and death."
— The Daily Record (UK)

"What makes [the book] special is Williams’s understanding of how gender shaped Mary’s life."
— The Times (Ireland)