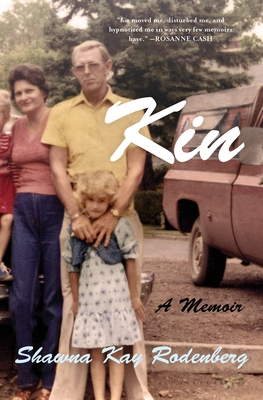 “Kin moved me, disturbed me, and hypnotized me in ways very few memoirs have." –Rosanne Cash

A heart stopping memoir of a wrenching Appalachian girlhood and a multilayered portrait of a misrepresented people, from Rona Jaffe Writer's Award winner Shawna Kay Rodenberg.

When Shawna Kay Rodenberg was four, her father, fresh from a ruinous tour in Vietnam, spirited her family from their home in the hills of Eastern Kentucky to Minnesota, renouncing all of their earthly possessions to live in the Body, an off-the-grid End Times religious community. Her father was seeking a better, safer life for his family, but the austere communal living of prayer, bible study and strict regimentation was a bad fit for the precocious Shawna. Disciplined harshly for her many infractions, she was sexually abused by a predatory adult member of the community. Soon after the leader of the Body died and revelations of the sexual abuse came to light, her family returned to the same Kentucky mountains that their ancestors have called home for three hundred years. It is a community ravaged by the coal industry, but for all that, rich in humanity, beauty, and the complex knots of family love. Curious, resourceful, rebellious, Shawna ultimately leaves her mountain home but only as she masters a perilous balancing act between who she has been and who she will become.

Kin is a mesmerizing memoir of survival that seeks to understand and make peace with the people and places that were survived. It is above all about family-about the forgiveness and love within its bounds-and generations of Appalachians who have endured, harmed, and held each other through countless lifetimes of personal and regional tragedy.

Shawna Kay Rodenberg holds an MFA from the Bennington Writing Seminars. Her reviews and essays have appeared in Consequence, Salon, the Village Voice, and Elle. In 2016, Shawna was awarded the Jean Ritchie Fellowship, the largest monetary award given to an Appalachian writer, and in 2017 she was the recipient of a Rona Jaffe Foundation Writer's Award. A registered nurse, community college English instructor, mother of five, and grandmother of one, she lives on a hobby goat farm in southern Indiana.

“Defies easy definition . . .Partly a memoir about growing up in an end-times religious community, partly the story of the author’s childhood in a dilapidated mining town, Kin is also a book about the complex and often fraught relationships between parents and children. Most important, Kin explores the richness and dignity of Appalachian life in the 1980s . . . [Rodenberg] writes about her difficult childhood with a sense of grace and generosity . . . [her] stories of lives that are generally overlooked make for essential reading.” - The Washington Post

“Brilliantly detailed . . . Scorning the stereotypes, [Rodenberg] gives us a story about forgiveness and love.” - Newsday

“Whatever you believe about Appalachia, prepare to have those beliefs upended, or at least beautifully complicated. Unless, of course, you are from there, and then prepare to glimpse what is possible. Kin in about remembering ‘who and what’ we are—to not only making peace with that, but to shape it into something remarkable” - Nick Flynn, author of THIS IS THE NIGHT OUR HOUSE WILL CATCH FIRE

“Shawna Kay Rodenberg tells her story with a near-heroic self-awareness and insight into her family, her Appalachian ancestors, her spiritual suffering and religious sustenance, the damage done by generations of abuse, and the damage repaired by love and her own self-witness. She is a masterful storyteller, and I have tremendous admiration for her lucid courage and for the way her personal resiliency seems to have generated a specific kind of prose, both powerful and kind.” - Rosanne Cash

“This startling memoir of a wild soul will electrify you. The unbreakable Shawna Kay rises again and again to forgive, despite every institution that failed her.” - Bonnie Jo Campbell, author of MOTHERS, TELL YOUR DAUGHTERS

“An intimate portrait of hardscrabble life in a much-derided, little-understood place. With the grit of the damaged yet hopeful, Rodenberg crafts the raw notes of faith, addiction, and generational trauma into a hymn to survival. By focusing on the deeply personal lived experience of a family, Kin contains worlds.” - Michael Patrick F. Smith, author of THE GOOD HAND

“A remarkable story that will stay with you long after you have finished reading.” - Rose Andersen, author of THE HEART AND OTHER MONSTERS

“Written from a reservoir of astonishing empathy, Rodenberg never shies away from the complexities and contradictions of the forces that shaped her. Kin bears testament to how family and place can nurture and maim—and to the redeeming act of storytelling.” - Jason Kyle Howard, author of A FEW HONEST WORDS

“A gutsy testament to pure grit and the resilience of the human spirit. All through this astonishing testimony of a family in the grip of piety threads a remarkable place—Kentucky—benevolent and beloved.” - Janisse Ray, author of ECOLOGY OF A CRACKER CHILDHOOD

“Shawna Kay Rodenberg may have been born 'bruised-ass-backward into a world of chaos' in Appalachia, but her memoir Kin is so full of ballsy intelligence and unremitting love that it feels like secular scripture. Like Richard Wright's Black Boy and Mary Karr's The Liars' Club, Kin is a American original.” - Benjamin Anastas, author of TOO GOOD TO BE TRUE

“I hope this book will fall into the hands of everyone who has ever swallowed their words, hid their scars, been mocked, laughed at, or ignored. Rodenberg’s lyricism, mastery of form, and command of image and metaphor are matched only by the power of her honesty and the precision of her recall. Kin will endure and bring light and warmth to all who encounter this beautiful book.” - Robert Gipe, author of POP: AN ILLUSTRATED NOVEL

“A vivid coming-of-age account...This engrossing series of dispatches offers a humanizing take on an Appalachia not often seen.” - Publishers Weekly

“Rodenberg writes with an evocative and unflinching style…This is a richly nuanced portrait of people and place, along with the bounds of forgiveness. Good for biography readers eager to explore the complexities of family relationships, or readers interested in women’s lives in Appalachia.” - Library Journal

“A fascinating memoir. What makes this one special is the way the debut author widens her view to tell the stories of her parents, grandparents, and other relatives, including times before she was born, with as much compassion and realistic detail as she gives her own story . . . a nuanced portrait of a complicated place and people.” - Booklist (starred review)

“Kin is highly readable, even in the darkest of its many dark moments. Rodenberg is a gifted writer and brings her setting to life. It is a beautifully written look at resilience and the power of family and place.” - Bookreporter

“[Rodenberg] intersperses third-person accounts of her mother's life in Kentucky and her father's before he went to Vietnam . . . the alternating chapters provide context and feed Rodenberg's overarching theme about how stories repeat in families, that lineage ‘wasn't about the past, like people often thought, so much as the future’ . . . [Rodenberg’s] life doesn't end with the memoir's last page. There's always more to be said. Here's hoping she will.” - The Minneapolis Star Tribune

“Rodenberg’s memoir captures so many of the feelings Appalachian young people experience as they must choose between staying in the place they love or leaving for better opportunities.” - Book Riot, “15 More Books About Appalachia to Read Instead of Hillbilly Elegy”