The Age of the Strongman: How the Cult of the Leader Threatens Democracy Around the World (Hardcover) 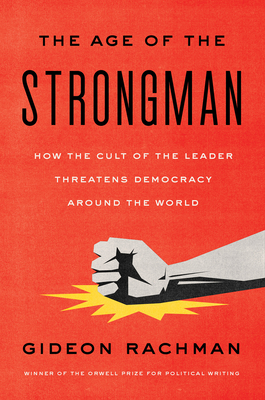 From Putin, Trump, and Bolsonaro to Erdoğan, Orbán, and Xi, an intimate look at the rise of strongman leaders around the world.

The first truly global treatment of the new nationalism, underpinned by an exceptional level of access to its key actors, from the award-winning journalist and author of Easternization.


This is the most urgent political story of our time: authoritarian leaders have become a central feature of global politics. Since 2000, self-styled strongmen have risen to power in capitals as diverse as Moscow, Beijing, Delhi, Brasilia, Budapest, Ankara, Riyadh, and Washington. These leaders are nationalists and social conservatives, with little tolerance for minorities, dissent, or the interests of foreigners. At home, they claim to be standing up for ordinary people against globalist elites; abroad, they posture as the embodiments of their nations. And everywhere they go, they encourage a cult of personality. What’s more, these leaders are not just operating in authoritarian political systems but have begun to emerge in the heartlands of liberal democracy.

Gideon Rachman has been in the same room with most of these strongmen and reported from their countries over a long journalistic career. While others have tried to understand their rise individually, Rachman pays full attention to the widespread phenomenon and uncovers the complex and often surprising interaction among these leaders. In the process, he identifies the common themes in our local nightmares, finding global coherence in the chaos and offering a bold new paradigm for navigating our world.

Gideon Rachman is chief foreign affairs commentator for the Financial Times. He joined the FT in 2006, after 15 years at The Economist, where he served as a correspondent in Washington D.C., Brussels, and Bangkok. In 2010 Rachman published his first book, Zero Sum World, which predicted the rise in international political tensions and turmoil that followed the global financial crisis. In 2016, Rachman won the Orwell Prize, Britain’s leading award for political writing. He was also named Commentator of the year at the European Press Prize, known as the “European Pulitzers.” Rachman’s previous book, Easternization: Asia’s Rise and America’s Decline From Obama to Trump and Beyond, was published by Other Press in 2018.

“[A] wide-ranging and astute new book…powerful.” —The Economist

“Timely…[Rachman] has a journalist’s eye for the telling quote combined with a sharp analysis of the factors that enabled [these strongmen] to achieve power and hold on to it.” —The Times (UK)

“A cogent analysis of the recent proliferation of right-wing despots…readable, engaging, and extremely worthwhile.” —Booklist

“An illuminating blend of dark warnings about the present and optimism that strongman rule can never prevail in the long term.” —Kirkus Reviews

“Rachman is not the first to draw attention to the appeal of the strongman, but what he does well is show the common elements of their rule, who their shared enemies are, how intent they are on undermining institutional obstacles such as an independent judiciary, and the commonalities in their rhetoric.” —Prospect

“Timely, laser-sharp, and unsettling. In telling us about strongmen who dominate politics around the world, Gideon Rachman paints a picture that is at turns illuminating and terrifying. A must-read.” —Peter Frankopan, author of The Silk Roads: A New History of the World

“A carefully written analysis of strongman leaders all over the world and the threat they pose to liberal democracy. Drawing on a wide range of sources, and providing a truly global perspective, Rachman illuminates the common instincts, tactics, and behavior that link leaders as diverse as Trump, Putin, Xi, and Modi.” —Anne Applebaum, author of Twilight of Democracy

“It was not long ago that most commentators thought globalization had triumphed over nationalism and the world was heading towards some version of liberal democracy. Today, we are in the midst of a vigorous resurgence of nationalism led by authoritarian strongmen. This is partly because many people have failed to benefit from economic growth, and their aspirations have been dashed. But it is also because there is now a supply of powerful authoritarian, nationalist ideas. This readable book does an admirable job of providing the lay of the land and highlighting the importance of the battle of ideas for the future of our institutions and norms.” —Daron Acemoglu, coauthor of Why Nations Fail and The Narrow Corridor

“Gideon Rachman’s concise and trenchant portraits reveal the personality types, policy choices, and motivations of the strongmen of our time. He writes about established autocrats, like China’s Xi Jinping, and about leaders who have authoritarian tendencies, like Britain’s Boris Johnson and America’s Donald Trump. A valuable and engagingly written book.” —Ruth Ben-Ghiat, author of Strongmen: Mussolini to the Present

“An indispensable book that serves as a landmark as it clearly guides the reader in understanding our crisis-riven age. A superb and scintillating portrait of leaders who have upended the smug consensus of globalization.” —Shruti Kapila, author of Violent Fraternity: Indian Political Thought in the Global Age

“The rise of populist politicians in democracies and autocracies is one of the most disturbing features of the post–2008 crash world. Gideon Rachman brings his deep knowledge, global perspective, and astute judgments to this phenomenon, giving us compelling pen portraits of the strongmen leaders of today, while showing the deeper forces that have led us to the current economic and social turmoil. This is a brilliant, unsettling portrait of our era.” —Rana Mitter, author of China’s Good War: How World War II Is Shaping a New Nationalism

“Essential and definitive. Rachman’s gripping survey of the rise of strongman leaders across the globe is the story of the dashed hopes of liberalism since the end of the Cold War. To understand the chilling stakes of the global Great Game defining this century—the battle between autocracies and democracies—you need only turn to Rachman’s magisterial and deftly written book.” —Catherine Belton, author of Putin’s People: How the KGB Took Back Russia and Then Took On the West

“When it comes to making sense of today’s world, Gideon Rachman is in a league of his own. He is sharp, original, and unsentimental. Where others see a new clash between democracy and authoritarianism, he describes the rise of strongman politics as a defining feature of both authoritarian regimes and many of the world’s largest democracies. And the bad news is that the global revolt against the separation of powers and liberal constitutionalism has good chances of succeeding.” —Ivan Krastev, coauthor of The Light that Failed

“In a chaotic world where old definitions of left and right no longer hold, Rachman expertly and artfully surfaces the underlying political, economic, and cultural patterns behind the new authoritarianism across the world.” —Peter Pomerantsev, author of This Is Not Propaganda: Adventures in the War Against Reality

“From Trump and Putin to Erdogan and Xi…Rachman examines the rise of the strongman. He has seen some of them up close, so he should bring more than a dash of insight.” —The Times (UK), Best Books Coming Out This Year

“[Rachman] uncovers the complex and often surprising interaction between these [autocratic] leaders.” —Financial Times, The Books to Read This Year