Verdict on Vichy: Power and Prejudice in the Vichy France Regime (Paperback) 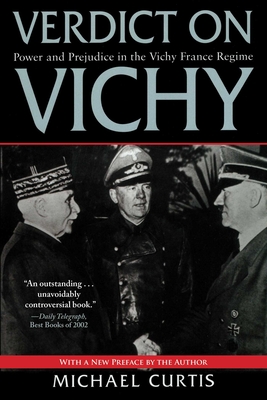 This masterful book is the first comprehensive reappraisal of the Vichy France regime for over 20 years. France was occupied by Nazi Germany between 1940 and 1944, and the exact nature of France's role in the Vichy years is only now beginning to come to light. One of the main reasons that the Vichy history is difficult to tell is that some of France's most prominent politicians, including President Mitterand, have been implicated in the regime. This has meant that public access to key documents has been denied and it is only now that an objective analysis is possible. The fate of France as an occupied country could easily have been shared by Britain, and it is this background element, which enhances our fascination with Vichy France. How would we have acted under similar circumstances? The divisions and repercussions of the Vichy years still resonate in France today, and whether you view the regime as a fascist dictatorship, an authoritarian offshoot of the Third Reich or an embodiment of heightened French nationalism, Curtis's rounded, incisive book will be seen as the standard work on its subject for many years.

Skyhorse Publishing, as well as our Arcade imprint, are proud to publish a broad range of books for readers interested in history--books about World War II, the Third Reich, Hitler and his henchmen, the JFK assassination, conspiracies, the American Civil War, the American Revolution, gladiators, Vikings, ancient Rome, medieval times, the old West, and much more. While not every title we publish becomes a New York Times bestseller or a national bestseller, we are committed to books on subjects that are sometimes overlooked and to authors whose work might not otherwise find a home.

Michael Curtis is a distinguished professor emeritus of political science at Rutgers University. He is highly regarded as an expert in several fields—political theory, comparative government, European politics, and the Middle East. He is the author of more than thirty books, and for many years he was the president of American Professors for Peace in the Middle East and editor of the Middle East Review. Born in London and educated at the London School of Economics, Professor Curtis has taught at Yale University, Hebrew University, Tel Aviv University, and University of Bologna, in addition to his years at Rutgers. He lives in Princeton, New Jersey, is married, and has two sons and six grandchildren.