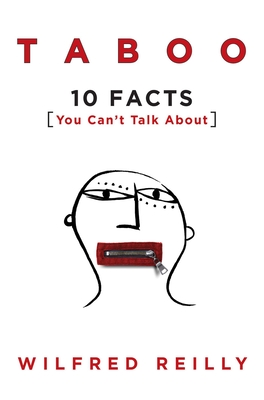 You Can’t Say That!

Do you have a right to be offended by the facts?

Against all the evidence, the mainstream media insist that America has never been more racist and sexist. The police are waging a war on Black people. “White privilege” means minorities never get a fair shake. Although this narrative of oppression is demonstrably fictitious, it is taboo to question it, and those who do so risk being labeled racist or sexist themselves. America needs an honest conversation based on common sense and cold, hard facts.

Honesty and respect for the facts are the specialty of Wilfred Reilly, the celebrated author of Hate Crime Hoax. In Taboo, he fearlessly examines ten forbidden truths that have been buried by political correctness. They include:

-The Black rate of violent crime is roughly 2.5 times the white rate. When demographic variables are taken into account, there are no racial differences in the rate of police-involved shootings.
-Interracial crime is remarkably rare, but 75 to 80 percent of it occurs against white people.
-Minorities can be racist—take the Nation of Islam, which holds that white people are an inferior race created by a Black scientist.
-Disparities between racial groups in IQ testing and SAT performance are the result of cultural variables, such as the presence of a father in the home, not racism.

Reilly goes where most social scientists fear to tread, using objective statistics and common sense to tackle taboo topics. Taboo is an essential takedown of the lies you hear every day from ideological activists and lazy, biased media.

WILFRED REILLY, associate professor at Kentucky State University, is the author of Hate Crime Hoax and The $50,000,000 Question. His writing has been featured in Commentary, Quillette, USA Today, and the Washington Times, as well as in Academic Questions and other scholarly journals. His research interests include modern American race relations and the use of modern quantitative methods to test “sacred cow” theories.

“This is a book America desperately needs. Wilfred Reilly’s boisterous dismantling of some of the most cherished myths that animate the social justice left and the racially antagonistic right is as enjoyable as it is compelling. Taboo is a prodigious and analytical work. Its conclusions about the trajectory of American race relations are encouraging, so it is certain to make a splash. There is nothing purveyors of social discord hate more than good news.”
— —Noah Rothman, associate editor of Commentary and author of Unjust: Social Justice and the Unmaking of America

“Finally, a Black intellectual has come along to challenge leftist dogma and intellectual dishonesty. Nothing is off-limits in this remarkably honest dissertation. He is a no-nonsense, tough but fair-minded scholar…. We need more Will Reillys in the country.”
— —Marc J. Defant, author of The New Creationists: The Radical Left’s War on Science, Society, and Rational Thought

“Wilfred Reilly is one of the most interesting and exciting American intellectuals to emerge in our time. I’m in awe of the fearlessness with which Reilly takes on current nostrums on race in his vitally necessary and powerful Taboo.”
— —John Podhoretz, editor of Commentary