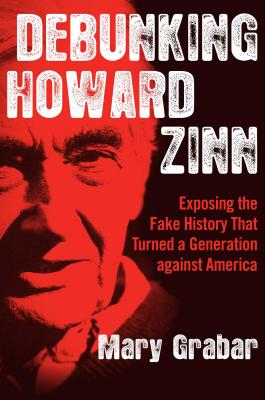 Howard Zinn’s A People’s History of the United States has sold more than 2.5 million copies. It is pushed by Hollywood celebrities, defended by university professors who know better, and assigned in high school and college classrooms to teach students that American history is nothing more than a litany of oppression, slavery, and exploitation.

Zinn’s history is popular, but it is also massively wrong.

Grabar also reveals Zinn’s bag of dishonest rhetorical tricks: his slavish reliance on partisan history, explicit rejection of historical balance, and selective quotation of sources to make them say the exact opposite of what their authors intended. If you care about America’s past—and our future—you need this book.

Mary Grabar is a resident fellow at the Alexander Hamilton Institute for the Study of Western Civilization and the founder of the Dissident Prof Education Project. She taught at the college level for twenty years, most recently at Emory University, and her work has been published by The Federalist, Townhall, FrontPage Magazine, City Journal, American Greatness, and Academic Questions.

“It’s about time someone published a comprehensive answer to Howard Zinn’s bestselling A People’s History of the United States, which is the Mein Kampf of the Hate America Left…. Mary Grabar has done Americans and the freedoms they have championed a great service by writing a definitive exposure of Zinn’s treasonous life, along with a damning refutation of his dishonest, malignant, and ignorant work.”
— David Horowitz

“At long last we have a comprehensive critique of Howard Zinn’s A People’s History of the United States, an execrable work of pseudohistory, full of mistakes, lies, half-truths, and smears.”
— Peter A. Coclanis

“Mary Grabar has produced a devastating analysis of the lies, plagiarism, violation of academic standards, and simple-minded platitudes that characterize Howard Zinn’s best-selling A People’s History of the United States…. as Grabar demonstrates, it has contributed to a serious and potentially disastrous misunderstanding of American history and society.”
— Harvey Klehr

“Zinn’s book has probably done more to poison the minds of high school students than any other work of history. Grabar provides an overdue anatomy of Zinn’s many errors and tendentious interpretations of the United States as an evil, racist empire…. a much-needed antidote to one of the chief intellectual frauds of our time.”
— Roger Kimball