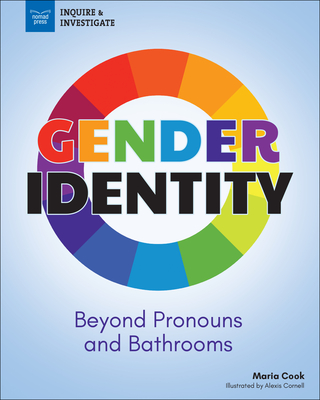 An informative and project-filled book for middle graders to explore the meaning and history behind LGBTQ rights movements, including biographies of key figures in gender and gay/lesbian history, the context behind today's transgender "bathroom wars" and dozens of activities and research ideas for perspectives and further learning.

What does it mean to think of gender as being a range instead of being simply male or female? In Gender Identity: Beyond Pronouns and Bathrooms, middle school readers unpack the cultural significance of gender identity in the United States and around the world.

Written using #ownvoices and with editors trained in the sensitivities of today's gender discussions, the book is filled with interesting facts, primary sources, a range of text features, and more to engage readers.

- Introductions to concepts crucial to understanding the basics of gender identity, including how gender identity differs from physical sex and sexual orientation, the importance of gender-specific and gender-neutral pronouns, and more

- In-depth information on famous gay/lesbian rights protests and movements, detailing the cultural and legal struggles for gay rights and gender acceptance, from the Compton Cafeteria riots to the Stonewall Riots to the Transgender Day of Remembrance, and more.

Sidebars throughout on how books and popular TV shows and movies helped expand gay/lesbian awareness and rights, from 1970s shows such as The Jeffersons to the contemporary show Meet Polkadot.

Projects and activities encourage teens to form their own, well-informed opinions on the many facets of gender perspectives and issues.

Gender Identity is part of a set of four books called Inquire & Investigate Social Issues of the Twenty-First Century, which explores the social challenges that have faced our world in the past and that continue to drive us to do better in the future. Other titles in this set are Feminism, Immigration Nation, and Race Relations.

About the series and Nomad Press

Nomad Press books in the Inquire & Investigate series integrate content with participation, encouraging readers to engage in student-directed learning as opposed to teacher-guided instruction. This student-centered approach provides readers with the tools they need to become inquiry-based learners. Combining content with inquiry-based projects stimulates learning and makes it active and alive. As informational texts, our books provide key ideas and details from which readers can make their own inferences. Nomad's unique approach simultaneously grounds kids in factual knowledge while allowing them the space to be curious, creative, and critical thinkers.

All books are leveled for Guided Reading level and Lexile, and meet Common Core State Standards and National Curriculum Standards for Social Studies. All titles are available in paperback, hardcover, and ebook formats.

Maria Cook is an award-winning freelance writer who holds a BS in secondary English education and an MFA in writing, both from Butler University. Her nonfiction can be found in such publications as Marie Claire, Narratively, and Green Matters. Maria lives in Indianapolis, Indiana. Alexis Cornell is a graduate of The Center for Cartoon Studies. Alexis has illustrated several books for Nomad Press, including Big Data: Information in the Digital World with Science Activities for Kids and Artificial Intelligence: Thinking Machines and Smart Robots with Science Activities for Kids. She lives in Northampton, Massachusetts.