Heading Out to Wonderful (CD-Audio) 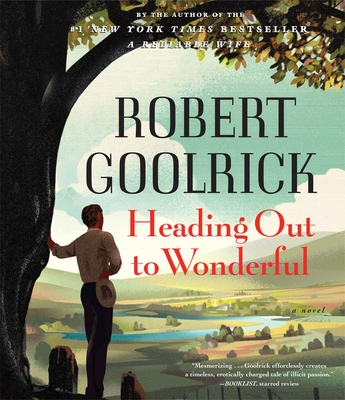 By Robert Goolrick
$32.95
Email or call for price.

“True to what you'd expect from the author of A Reliable Wife, Goolrick's characters are enigmatic, imperfect, and do not behave according to society's dictates. The romance that erupts between Sylvan Glass, an unschooled country girl with dreams of Hollywood, and Charlie Beale, a newcomer to town, will change everyone in town in unexpected ways, most of all young Sam who bears witness to their fiery, ill-fated affair. A great read!”
— Connie Brooks, Battenkill Books, Cambridge, NY

In 1948, a mysterious and charismatic man arrives in a small Virginia town carrying two suitcases—one contains his worldly possessions, the other is full of money. He soon inserts himself into the town’s daily life, taking a job in the local butcher shop and befriending the owner and his wife and their son. But the passion that develops between the man and the wife of the town’s wealthiest citizen sets in motion a series of events that not only upset the quiet town but threaten to destroy both him and the woman.

In addition to his most recent novel, The Fall of Princes, Robert Goolrick is the author of three other books: The End of the World as We Know It, a memoir; his first novel, A Reliable Wife, with sales of more than 1 million copies; and his second novel, Heading Out to Wonderful. He lives in Virginia.

“Dietz . . . offers up strong and unique voices. . . . This is a first-rate audio production.”
—Publishers Weekly

“Dietz’s calm style adds to the sensuous descriptions while still creating the feeling that something bad is going to happen. The listener, lulled by Dietz’s tender voice, will feel the horror of the plot’s climax as strongly as young Sam and the people of Brownsburg.”
—AudioFile

“[A] soulful and heart wrenching tale of love that knows no bounds.”
—Family Circle

“Goolrick is a writer with a big heart and a deft hand for drama. I look forward to whatever he pens next.”
—Washington Post

“A character-driven novel by Robert Goolrick, allows Dietz to offer listeners the full measure of a dramatic talent he honed during his decades in theater. Using low tones, near whispers—at turns urgent, reflective, matter of fact—Dietz describes an affair that consumes two people, shakes a town and permanently warps the young boy who witnesses it.”
—Lancaster Online

“I can’t tell you . . . how entrancing the reading by Norman Dietz. It’s one of the best narratives I’ve ever run across. Dietz’s voice is perfect, and perfectly engrossing. . . . I urge you to forego the pleasures of the page and seek out these eight CDs from HighBridge.”
—Ralph Magazine