Lincoln's Generals' Wives: Four Women Who Influenced the Civil War--For Better and for Worse (Civil War in the North) (Hardcover) 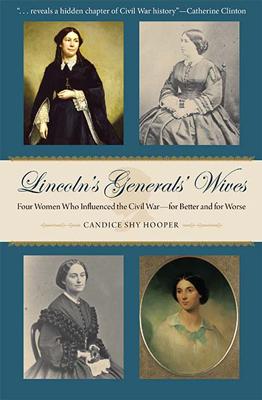 The story of the American Civil War is not complete without examining the extraordinary and influential lives of Jessie Fr mont, Nelly McClellan, Ellen Sherman, and Julia Grant, the wives of Abraham Lincoln's top generals. They were their husbands' closest confidantes and had a profound impact on the generals' ambitions and actions. Most important, the women's own attitudes toward and relation- ships with Lincoln had major historical significance.

Candice Shy Hooper's lively account covers the early lives of her subjects, as well as their families, their education, their political attitudes, and their personal beliefs. Once shots were fired on Fort Sumter, the women were launched out of their private spheres into a wholly different universe, where their relationships with their husbands and their personal opinions of the president of the United States had national and historical consequences.

The approaches and styles of Fr mont and McClellan contrast with those of Sherman and Grant, and there is equal symmetry in their wives' stories. Jessie Fr mont and Nelly McClellan both encouraged their husbands to persist in their arrogance and delusion and to reject the advice and friendship of their commander in chief. In the end, Jessie and Nelly contributed most to the Union war effort by accelerating their husbands' removal from active command. Conversely, while Ellen Sherman's and Julia Grant's belief in their husbands' character and potential was ardent, it was not unbounded. Ellen and Julia did not hesitate to take issue with their spouses when they believed their actions were wrong or their judgments ill-advised. They intelligently supported their husbands' best instincts--including trust in and admiration for Lincoln--and re-buffed their worst. They were the source of strength that Sherman and Grant used to win the Civil War.

Relying on a close reading of letters, memoirs, and other primary sources--and, for the first time, mapping the women's wartime travels--Hooper explores the very different ways in which these remarkable women responded to the unique challenges of being Lincoln's generals' wives.

Candice Shy Hooper's writing has been published in The Journal of Military History and The New York Times. She received her M.A. in history from The George Washington University and is a member of the Board of Advisors of President Lincoln's Cottage in Washing- ton, D.C., and of the advisory board of the Ulysses S. and Julia D. Grant Historical Home in Detroit, Michigan.