On Lying and Politics: A Library of America Special Publication (Paperback) 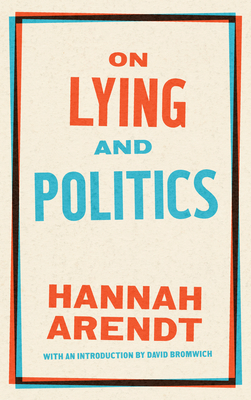 More urgent than ever, two landmark essays by the legendary political theorist on the greatest threat to democracy, gathered with a new introduction by David Bromwich

“No one,” Hannah Arendt observed, “has ever counted truthfulness as a political virtue.” But why do politicians lie? What is the relationship between political lies and self-delusion? And how much organized deceit can a democracy endure before it ceases to function?

Fifty years ago, the century’s greatest political theorist turned her focus to these essential questions in two seminal essays, brought together here for the first time. Her conclusions, delivered in searching prose that crackles with insight and intelligence, remain powerfully relevant, perhaps more so today than when they were written.

In “Truth and Politics,” Arendt explores the affinity between lying and politics, and reminds us that the survival of factual truth depends on the testimony of credible witnesses and on an informed citizenry. She shows how our shared sense of reality—the texture of facts in which we wrap our daily lives—can be torn apart by organized lying, replaced with a fantasy world of airbrushed evidence and doctored documents.

In “Lying in Politics,” written in response to the release of the Pentagon Papers, Arendt applies these insights to an analysis of American policy in Southeast Asia, arguing that the real goal of the Vietnam War—and of the official lies used to justify it by successive administrations—was nothing other than the burnishing of America’s image.

In his introduction, David Bromwich (American Breakdown: The Trump Years and How They Befell Us) engages with Arendt’s essays in the context of her other writings and underscores their clarion call to take seriously the ever-present threat to democracy posed by lying.

HANNAH ARENDT (1906–1975) was one of the foremost political philosophers of the twentieth century, the author of The Origins of Totalitarianism, The Human Condition, Eichmann in Jerusalem, On Revolution, and the posthumously published The Life of the Mind. Her commentaries on modern American and European politics and on the history of political thought were collected in Essays in Understanding, Thinking Without a Banister, and Responsibility and Judgment.

DAVID BROMWICH is Sterling Professor of English at Yale University. His books include The Intellectual Career of Edmund Burke and American Breakdown: The Trump Years and How They Befell Us. His articles on contemporary politics have appeared in Dissent, The Nation, HuffPost, The New York Review of Books, and the London Review of Books.