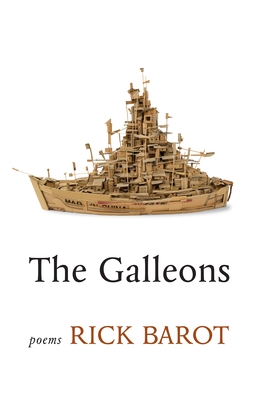 For almost twenty years, Rick Barot has been writing some of the most stunningly crafted lyric poems in America, paying careful, Rilkean attention to the layered world that surrounds us. In The Galleons, he widens his scope, contextualizing the immigrant journey of his Filipino-American family in the larger history and aftermath of colonialism.

These poems are engaged in the work of recovery, making visible what is often intentionally erased: the movement of domestic workers on a weekday morning in Brooklyn; a veteran of the war in Afghanistan, fondly sharing photos of his dog; the departure and destination points of dozens of galleons between 1564 and 1815, these ships evoking both the vast movements of history and the individual journeys of those borne along by their tides. "Her story is a part of something larger, it is a part / of history," Barot writes of his grandmother. "No, her story is an illumination // of history, a matchstick lit in the black seam of time."

With nods toward Barot's poetic predecessors--from Frank O'Hara to John Donne--The Galleons represents an exciting extension and expansion of this virtuosic poet's work, marrying "reckless" ambition and crafted "composure," in which we repeatedly find the speaker standing and breathing before the world, "incredible and true."

Rick Barot was born in the Philippines and grew up in the San Francisco Bay Area. He has published three previous volumes of poetry: The Darker Fall; Want; which was a finalist for the Lambda Literary Award and won the 2009 GrubStreet Book Prize; and Chord. Chord received the UNT Rilke Prize, the PEN Open Book Award, and the Publishing Triangle's Thom Gunn Award. It was also a finalist for the Los Angeles Times Book Prize. His work has appeared in numerous publications, including Poetry, the New Republic, Tin House, the Kenyon Review, and the New Yorker. He has received fellowships from the National Endowment for the Arts, the Artist Trust of Washington, the John Simon Guggenheim Memorial Foundation, and Stanford University. He is the poetry editor for the New England Review. He lives in Tacoma, Washington, and directs The Rainier Writing Workshop, the low-residency MFA program in creative writing at Pacific Lutheran University.