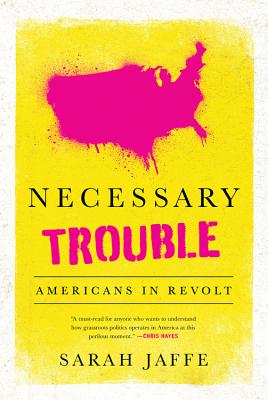 Necessary Trouble is the definitive book on the movements that are poised to permanently remake American politics. We are witnessing a moment of unprecedented political turmoil and social activism. Over the last few years, we've seen the growth of the Tea Party, a twenty-first-century black freedom struggle with BlackLivesMatter, Occupy Wall Street, and the grassroots networks supporting presidential candidates in defiance of the traditional party elites.

Sarah Jaffe leads readers into the heart of these movements, explaining what has made ordinary Americans become activists. As Jaffe argues, the financial crisis in 2008 was the spark, the moment that crystallized that something was wrong. For years, Jaffe crisscrossed the country, asking people what they were angry about, and what they were doing to take power back. She attended a people's assembly in a church gymnasium in Ferguson, Missouri; walked a picket line at an Atlanta Burger King; rode a bus from New York to Ohio with student organizers; and went door-to-door in Queens days after Hurricane Sandy.

From the successful fight for a 15 minimum wage in Seattle and New York to the halting of Shell's Arctic drilling program, Americans are discovering the effectiveness of making good, necessary trouble. Regardless of political alignment, they are boldly challenging who wields power in this country.

Sarah Jaffe is a Type Media Center fellow and an independent journalist covering labor, economic justice, social movements, politics, gender, and pop culture. Jaffe is the author of Necessary Trouble: Americans in Revolt. Her work has appeared in the New York Times, the Nation, the Guardian, the Washington Post, the Atlantic, and many others.

She is the co-host, with Michelle Chen, of Dissent magazine's Belabored podcast, as well as a columnist at the New Republic and New Labor Forum. Jaffe was formerly a staff writer at In These Times and the labor editor at AlterNet. She was also the web director at GRITtv with Laura Flanders. She has a master's degree in journalism from Temple University and a bachelor's degree in English from Loyola University New Orleans. She lives in Philadelphia.

"Necessary Trouble is American history at its freshest and most compelling. Sarah Jaffe traces the many ways-from left to right-that Americans have risen up in response to the country's ongoing takeover by the obscenely rich. Sometimes we have to make trouble, and, as Jaffe reports, we're pretty damn good at it!"—Barbara Ehrenreich, author of Nickel and Dimed

"History is filled with stories of rebellion-and not just history, as Sarah Jaffe shows. What we've too often lacked are reporters willing and able to weave one-day stories into meaningful fabric. Jaffe does just that, with depth and breadth and eloquence. Necessary Trouble is necessary reading, and Jaffe's arrival is something to celebrate."—Laura Flanders, host and founder of The Laura Flanders Show

"Like Boadicea leading the Celts against the Romans or Joan of Arc breaking the siege of Orleans, Sarah Jaffe marches into the class war, fighting the good fight with a pen as sharp as any sword."—Bill Moyers

"Necessary Trouble offers the first up-close profile of those who decided to stop waiting for others to fulfill their dreams of a better country-the real revolutionaries of our age. ... Only those able to navigate this reinvigorated 21st-century culture of protest can truly understand modern politics. That makes Necessary Troublerequired reading."—David Dayen, The New Republic

"There have been attempts to describe this emerging movement for social justice in book form before. Necessary Trouble is the best so far. ... Jaffe is a leading light ... delightful and inspiring."—In These Times

"Scathing...Jaffe guides us through the new lexicon of protest--a world of 'privilege', 'horizontalism", and microagresions'."—New Statesman

"A political masterpiece... If you see yourself as a revolutionary, your bookshelf is nothing without this book."—Dan Arel, Patheos

"A sobering look at the struggles and demands of working Americans, many of whom feel they have been left behind by both Democratic and Republican policies at all levels of government. It provides an extraordinary overview of the newly-revived American labor movement, the push for a more just economy by the everyday people who are navigating the neoliberal status quo, and the forces that brought them into the streets in the first place."—Kyle Friend, Jobs With Justice

"A highly inspiring book... Read it and join the fray."—Heather Seggel, The Progressive Populist

"A vital chronicle of current political activism spearheaded by ordinary Americans...A compelling and eloquent read-and activists across the left should give it a read."—Anna Hamilton, Global Comment

"An in-depth...richly detailed...essential guide to forces shaping our nation and the 2016 presidential election."—Kirkus Review, Starred Review

"Necessary Trouble depicts the country as a pot set above the flames of economic discontent, ready to boil over. ... [The book] shines in its assessment of why those fault lines exist in the first place. Capitalism, Jaffe argues, promotes instability and class divisions...and her book finds the thread of economic injustice in every tapestry it weaves."—Vann R. Newkirk II, New York Time Book Review

"Compelling... Jaffe's book is not only an argument against the atomization of America, it is in itself a force against it."—Molly Sauter, Los Angeles Times

"The fullest account yet of the social movements that are attempting to transform American politics."—Tim Barker, London Review of Books

"Jaffe's effort to put radicalism at the center, not the fringes, of American democracy renders Necessary Trouble a necessary read."—Carlos Lozada, Washington Post

"Sarah Jaffe draws on her journalistic experience and talent to give us a vivid portrait of the contemporary protest movements that just may transform America."—Frances Fox Piven, author of Challenging Authority

"Sarah Jaffe's book tells the story of the giant step made by America's networked young people off the sidelines of progressive politics and into the foreground. It weaves together the story of radicalized labor activism, black protests against police violence, and the horizontalist movements. These are the stories the millennial generation will tell their grandchildren-about how they reversed the balance between the citizen and corporate power, and saved the planet."—Paul Mason, author of PostCapitalism: A Guide to Our Future

"Necessary Trouble is an engaging and insightful guide to the new American radicalism that erupted in the wake of the Great Recession. Jaffe deftly exposes the roots of anti-establishment activism across the political spectrum, from the Tea Party to Occupy Wall Street, the Black Lives Matter movement, and the Fight for 15. A must read for anyone interested in the nation's future."—Ruth Milkman, President, American Sociological Association, and author of On Gender, Labor and Inequality

"While commercial media can't seem to turn away from the Trump circus or Hillary's emails, Sarah Jaffe follows America's new radicals. And in doing so, tells a far more consequential story-one that reveals our recent past and an alternative future. The most compelling social and political portrait of our age, Necessary Trouble should be mandatory for anyone who thinks justice is necessary."—Robin D. G. Kelley, author of Freedom Dreams: The Black Radical Imagination

"The political activism and beliefs of ordinary Americans are as ignored as they are consequential. Sarah Jaffe is one of the few American journalists who has meaningfully covered this vital, growing force-invariably with passion, empathy, and unflinching insight. Her new book is indispensable for understanding how marginalized and resource-deprived communities are politically empowering themselves in ways that will fundamentally shape America's future."—Glenn Greenwald, author of No Place to Hide

"Sarah Jaffe has written a wise and eloquent book about the surging movements against inequality that are giving the one percent a run for its money. If you want to understand the present and future of the American left, you must read Necessary Trouble."—Michael Kazin, co-editor of Dissent and author of War Against War: The American Fight for Peace, 1914-1918

"Americans can be a quiescent people. But for the past eight years, we have been in revolt-consider #BlackLivesMatter, Moral Mondays, the Fight for 15, Occupy, the Bernie Sanders campaign, fights to save the public sector in Wisconsin and Chicago, and many more insurgencies. Yet few journalists have properly chronicled this moment, much less explained how and why such efforts came about, or analyzed their relation to one another. In this whip-smart, informative and inspiring book, Sarah Jaffe has done all that and much more: she has also summoned us to join in and make history. We must heed her!"—Liza Featherstone, author of Selling Women Short: The Landmark Battle for Workers Rights at Walmart

"Without a doubt, Sarah Jaffe is the preeminent social movement chronicler of her generation. Cutting through the hype, she finds the unsung heroes and tells the real story of how change happens. Mixing razor sharp analysis with moving reports from the front lines, Necessary Trouble reveals the interconnections, complexities, and possibilities of nearly a decade of radical uprisings. Read this book now-and then join the revolt."—Astra Taylor, author of The People's Platform and co-founder of The Debt Collective