Dissent: The Radicalization of the Republican Party and Its Capture of the Court (Compact Disc) 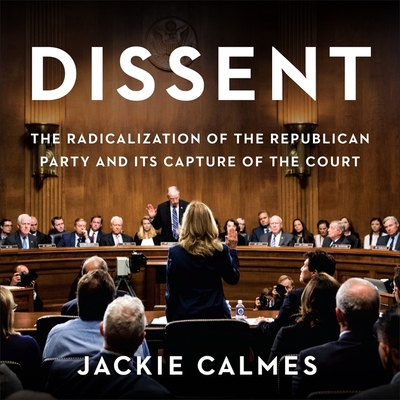 By Jackie Calmes, Cassandra Medcalf (Read by)
$40.00
Email or call for price.

Featuring new interviews with his accusers and overlooked evidence of his deceptions, a deeply reported account of the life and confirmation of Brett Kavanaugh, set against the conservative movement's capture of the courts.

In DISSENT, award-winning investigative journalist Jackie Calmes brings readers closer to the truth of who Supreme Court Justice Brett Kavanaugh is, where he came from, and how he and the Republican party at large managed to secure one of the highest seats of power in the land.

Kavanaugh's rise to the justice who solidified conservative control of the supreme court is a story of personal achievement, but also a larger, political tale: of the Republican Party's movement over four decades toward the far right, and its parallel campaign to dominate the government's judicial branch as well as the other two.

And Kavanaugh uniquely personifies this history. Fourteen years before reaching the Supreme Court, during a three-year fight for a seat on the D.C. Circuit Court of Appeals, Democratic Senator Dick Durbin would say to Kavanaugh, "It seems that you are the Zelig or Forrest Gump of Republican politics. You show up at every scene of the crime."

Featuring revelatory new reporting and exclusive interviews, DISSENT is a harrowing look into the highest echelons of political power in the United States, and a captivating survey of the people who will do anything to have it.