The Decline and Fall of the Roman Empire: Volume VI (Paperback) 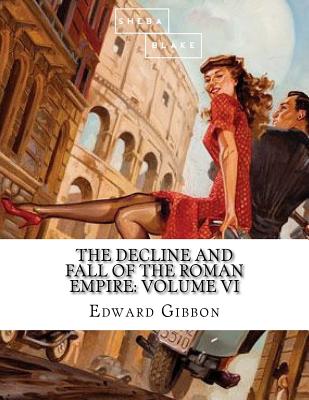 The Decline and Fall of the Roman Empire is a book of history written by the English historian Edward Gibbon, which traces the trajectory of Western civilization (as well as the Islamic and Mongolian conquests) from the height of the Roman Empire to the fall of Byzantium. It was published in six volumes. Volume I was published in 1776 and went through six printings. Volumes II and III were published in 1781; volumes IV, V, and VI in 1788-89. The original volumes were published in quarto sections, a common publishing practice of the time. The work covers the history, from 98 to 1590, of the Roman Empire, the history of early Christianity and then of the Roman State Church, and the history of Europe, and discusses the decline of the Roman Empire in the East and West. Because of its relative objectivity and heavy use of primary sources, unusual at the time, its methodology became a model for later historians. This led to Gibbon being called the first "modern historian of ancient Rome". Gibbon offers an explanation for the fall of the Roman Empire, a task made difficult by a lack of comprehensive written sources, though he was not the only historian to attempt the task. According to Gibbon, the Roman Empire succumbed to barbarian invasions in large part due to the gradual loss of civic virtue among its citizens. They had become weak, outsourcing their duty to defend their empire to barbarian mercenaries, who then became so numerous and ingrained that they were able to take over the Empire. Romans, he believed, were unwilling to live a tougher, military lifestyle. In addition, Gibbon argued that Christianity created a belief that a better life existed after death, which fostered an indifference to the present among Roman citizens, thus sapping their desire to sacrifice for a larger purpose. He also believed that Christianity's comparative pacifism tended to hamper the traditional Roman martial spirit. Finally, like other Enlightenment thinkers and British citizens of the age steeped in institutional anti-Catholicism, Gibbon held in contempt the Middle Ages as a priest-ridden, superstitious Dark Age. It was not until his own era, the "Age of Reason," with its emphasis on rational thought, it was believed, that human history could resume its progress. Gibbon saw the Praetorian Guard as the primary catalyst of the empire's initial decay and eventual collapse, a seed planted by Augustus when the empire was established. His writings cite repeated examples of the Praetorian Guard abusing their power with calamitous results, including numerous instances of imperial assassination and incessant demands for increased pay. He compared the reigns of Diocletian (284-305) and Charles V (1519-1556), noting superficial similarities. Both were plagued by continual war and compelled to excessive taxation to fund wars, both chose to abdicate as Emperors at roughly the same age, and both chose to lead a quiet life upon their retirement. However, Gibbon argues that these similarities are only superficial and that the underlying context and character of the two rulers is markedly different.