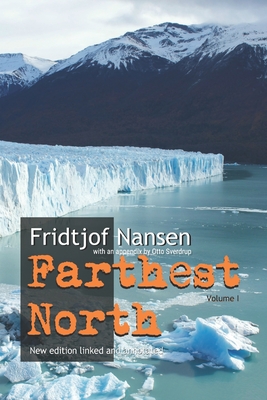 Nansen's "Fram" expedition was an attempt by the Norwegian explorer Fridtjof Nansen to reach the geographical North Pole by harnessing the natural east-west current of the Arctic Ocean. In the face of much discouragement from other polar explorers, in 1893, Nansen took his ship "Fram" to the New Siberian Islands in the eastern Arctic Ocean, froze her into the pack ice, and waited for the drift to carry her towards the pole. Three years later, Frederick Jackson, who had organised his own expedition to Franz Josef Land, was astonished to see"saw "a tall man, wearing a soft felt hat, loosely made, voluminous clothes and long shaggy hair and beard, all reeking with black grease". After a moment's awkward hesitation, Jackson recognized his visitor: "You are Nansen, aren't you?", and received the reply "Yes, I am Nansen." Nansen's first task on his return was to write his account of his voyage. This he did remarkably quickly, producing 300,000 words of Norwegian text by November 1896; the English translation, titled was ready in January 1897. The book was an instant success, and secured Nansen's long-term financial future. Although Nansen retired from exploration after this expedition, the methods of travel and survival he developed with Johansen influenced all the polar expeditions, north and south, which followed in the subsequent three decades.

Fridtjof Nansen was a Norwegian explorer, scientist, diplomat, humanitarian and Nobel Peace Prize laureate. In his youth he was a champion skier and ice skater. He led the team that made the first crossing of the Greenland interior in 1888, traversing the island on cross-country skis. He won international fame after reaching a record northern latitude of 86 degrees 14 minutes during his North Pole expedition of 1893-96. Although he retired from exploration after his return to Norway, his techniques of polar travel and his innovations in equipment and clothing influenced a generation of subsequent Arctic and Antarctic expeditions.