Run for Something: A Real-Talk Guide to Fixing the System Yourself (Paperback) 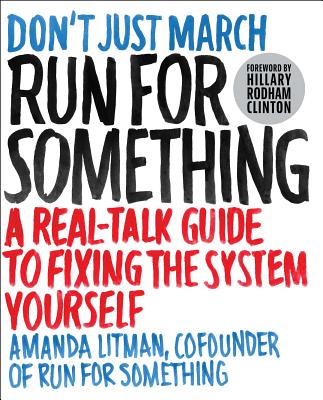 The must-have guide for young progressives looking to run for local office, complete with contributions from elected officials and political operatives.

You’ve been depressed since the night of November 8, 2016. You wore black to work the next morning. You berated yourself for your complacency during the Obama years. You ranted on Twitter. You deleted Twitter. You sent emails to your friends saying, “How can we get more involved?” You listened to Pod Save America. You knit­ted a pussyhat. You showed up to the Women’s March on Washington. You protested Donald Trump’s executive orders. You called your congressman. You called other people’s congressmen. You set up monthly donations to Planned Parenthood and the ACLU. You reactivated Twitter (begrudgingly).

Here’s what you do next: Run for something.

To be specific: Run for local office and become the change you want to see in the world. Forget about Con­gress. Forget about the Senate. Focus on the offices that get the real sh*t done: state legislatures, city councils, school boards, and mayors.

It doesn’t matter if you don’t understand the first thing about running for office, or never even imagined you would. That’s what this book is for.

Amanda Litman, experienced in hard-fought state and national election campaigns, is here to give you guid­ance as well as wisdom and insight from elected officials and political operatives she interviewed for this book.

There are half a million elected officials in the United States. Why can’t you be one of them?

Amanda Litman is the co-founder and executive director of Run for Something, a PAC that helps recruit and support young, diverse progressives running for down-ballot office. Previously, she was the email director for Hillary Clinton’s 2016 presidential campaign, digital director for Charlie Crist's 2014 Florida gubernatorial campaign, deputy email director for Organizing for Action, and an email writer for Barack Obama’s 2012 re-election campaign. She graduated from Northwestern University in 2012 with a B.A. in American Studies. She lives in Brooklyn with her rescue dog, Sadie. For more information, visit RunForSomething.net and follow @AmandaLitman on Twitter.

Hillary Rodham Clinton is the first woman in US history to become the presidential nominee of a major political party. She served as the 67th Secretary of State after nearly four decades in public service advocating on behalf of children and families as an attorney, First Lady, and US Senator. She is a wife, mother, grandmother, and author of seven previous books, all published by Simon & Schuster.