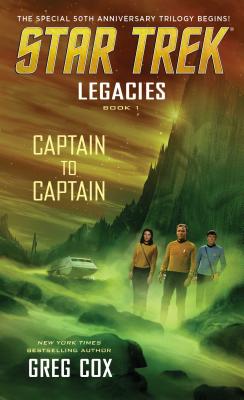 An epic new trilogy begins—a tie-in for the milestone fiftieth anniversary of Star Trek: The Original Series—that stretches from the earliest voyages of the Starship Enterprise to Captain Kirk’s historic five-year-mission…and from one universe to another!

Hidden aboard the U.S.S. Enterprise is a secret that has been passed from captain to captain, from Robert April to Christopher Pike to James T. Kirk. Now the return of the enigmatic woman once known as Number One has brought that secret to light, and Kirk and his crew must risk everything to finish a mission that began with April so many years ago…

Nearly two decades earlier, April and his crew first visited the planet Usilde, where they found both tragedy and a thorny moral dilemma. Today, the legacy of that fateful occasion will compel Kirk to embark on a risky voyage back to that forbidden world—which is now deep in territory claimed by the Klingon Empire!

Greg Cox is the New York Times bestselling author of numerous Star Trek novels and short stories. He has also written the official movie novelizations of War for the Planet of the Apes, Godzilla, Man of Steel, The Dark Knight Rises, Daredevil, Ghost Rider, and the first three Underworld movies, as well as books and stories based on such popular series as Alias, Buffy the Vampire Slayer, CSI, Farscape, The 4400, Leverage, The Librarians, Roswell, Terminator, Warehouse 13, Xena: Warrior Princess, and Zorro. He has received three Scribe Awards from the International Association of Media Tie-In Writers, as well as the Faust Award for Life Achievement. He lives in Lancaster, Pennsylvania. Visit him at GregCox-Author.com.