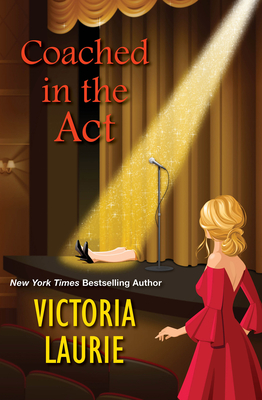 This is book number 3 in the A Cat & Gilley Life Coach Mystery series.

As East Hampton's go-to life coach, Cat Cooper and her BFF, Gilley, delve into the exclusive personal lives of the rich and infamous. But with local gossip growing vicious, knowing too much information can be a death sentence...

Wild rumors are swirling in the Hamptons over "Twelve Angry Men," a ruthlessly revealing one-woman show written and performed by Yelena Galanis. The well-known socialite dated her way through some of the East End's most eligible bachelors, and now she's sparing few details while spilling their humiliating secrets to scandalized crowds. It's a mean-spirited spectacle that urges Cat to make a beeline for the theater exit during the first act--only to later discover that Yelena was found stabbed to death during intermission that same evening...

Adding to the disturbing news, Cat realizes she may have had a close encounter with the murderer. But when the one lead gives way to another violent death, her newest client--romantically linked to Yelena--gets tagged as the prime suspect. Believing eleven other barely-anonymous men had reasons to kill the thespian for playing a cruel game of kiss and tell, Cat teams up with her sidekick, Gilley, to track down Yelena's list of rejected lovers and identify the vengeful culprit stalking around the seaside community, lingering frighteningly close to home...

Victoria Laurie is a real-life psychic and the New York Times bestselling author of the Psychic Eye Mysteries, the Ghost Hunter Mysteries, and the Life Coach Mysteries. She lives in suburban Michigan and can be found online at VictoriaLaurie.com.