The Kindness of Strangers: Penniless Across America (Paperback) 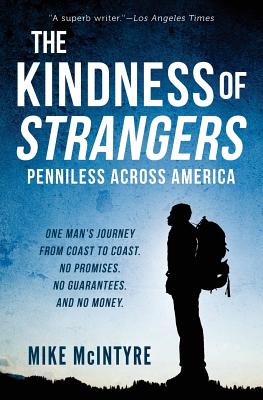 "Could you survive a cross-country trip relying only on the kindness of strangers? Well, Mike McIntyre did. He put our country to the test, and what he found out sure surprised me."-Oprah Winfrey
Stuck in a job he no longer found fulfilling, journalist Mike McIntyre felt his life was quickly passing him by. So one day he hit the road to trek from one end of the country to the other with little more than the clothes on his back and without a single penny in his pocket. Through his travels, he found varying degrees of kindness in strangers from all walks of life-and discovered more about people and values and life on the road in America than he'd ever thought possible. The gifts of food and shelter he received along the way were outweighed only by the touching gifts of the heart-the willingness of many he met to welcome a lonely stranger into their homes...and the discovery that sometimes those who give the most are the ones with the least to spare.
"An incredible journey."-CBS News
"A superb writer."-Los Angeles Times

Mike McIntyre is an award-winning journalist and the Wall Street Journal bestselling author of five books. He earned degrees from the University of California, Davis, and the University of Michigan. He's been a travel columnist for the Los Angeles Times, a theater columnist for the Washington Post, and a feature writer for the San Diego Union-Tribune and the Budapest Sun. His work has also appeared in Golf Digest, Reader's Digest, Air & Space/Smithsonian, and Powder. He divides his time between San Diego and the world.