The Best Horror of the Year, Volume Four (Compact Disc) 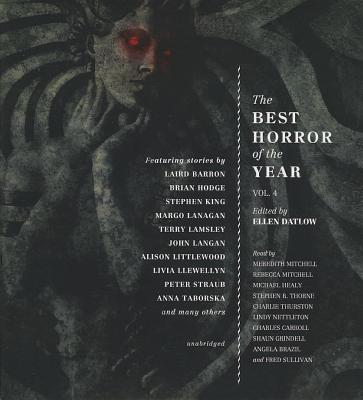 The first three volumes of The Best Horror of the Year have been widely praised for their quality, variety, and comprehensiveness. Editor Ellen Datlow has now explored the entirety of the diverse horror market, distilling it into the fourth anthology in the series and providing an overview of the year in terror. Fear is the oldest human emotion, the most primal. We like to think we're civilized. We tell ourselves we're not afraid. And every year, we skim our fingers across nightmares, desperately pitting our courage against shivering dread. In one story, a paraplegic millionaire hires a priest to exorcise his pain; in another, a failing marriage is put to the ultimate test. In other stories hunters become the hunted as a small group of men ventures deep into a forest; a psychic struggles for her life on national television; a soldier strikes a grisly bargain with his sister's killer; ravens answer a child's wish for magic; two mercenaries accept a strangely simplistic assignment; and a desperate woman in an occupied land makes a terrible choice. What scares you? Horror wears new faces in these carefully selected stories. The details may change, but the fear remains. With tales from Laird Barron, Stephen King, John Langan, Peter Straub, and many others, The Best Horror of the Year, Volume Four provides the petrifying horror fans of the genre have come to expect--and enjoy.